Modern moms are ready to show us their funnies 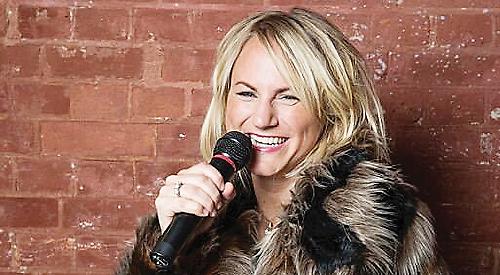 A YEAR on from its first ever stage outing, an all-female comedy show is returning to the Kenton Theatre next weekend — bigger and better than before.

This Show Does Not Contain Nuts features a unique combination of music, stand-up, sketch and burlesque comedy, the latter of which is billed as “a performance to make you blush”.

The show is the brainchild of Maddi Sharkey, a former banker turned comedy writer and producer who moved to Middle Assendon from Cookham two years ago.

Last January’s show at the New Street venue ended up selling out through word of mouth and tickets for this year’s performance on Saturday, January 20, are going fast.

Joining Tania are blogger and YouTuber Sarah Burke, aka “The Modern Mom”, and dancers Emilia East and Annie Watts, who will be performing a burlesque routine scripted by Maddi and choreographed by Jennamarie Smith — who is best known to Kenton audiences as the chair of the Henley Amateur Operatic and Dramatic Society (HAODS).

Returning from last year’s show are
comedian Sarah Keyworth, who is fresh from supporting Stewart Francis on tour, and former Henley College student Gabby Killick, who will be performing her “Girlfriend from Hell” stand-up routine.

Despite their shared links to Henley, it was in the Midlands capital that Gabby and Maddi first met.

“Gabby and myself did our first stand-up show together two and a bit years ago in this dodgy little club in Birmingham,” recalls Maddi.

“We were both taking part in a little comedy competition. Gabby went on to do lots of stand-up but I’m much more of a comedy writer and I kept coming back to the producing, directing, writing kind of thing.”

Maddi, 39, grew up in Shipston-on-Stour in Warwickshire. After leaving school she studied at the London College of Fashion before making her career in banking with Merrill Lynch, where she spent a total of seven years, including a spell in the US.

She left the industry in 2008 following the collapse of Lehman Brothers — “I have quite a good insight into the City” — and shortly afterwards left London too, relocating to Cookham with her husband, who still works in banking.

“I had my son and then after my second child I started writing more and more comedy,” says Maddi.

Not that the transition came easily at first. Having charted her new course, Maddi cut her teeth as a stand-up at the Comedy Store in London and, as she fondly recalls, “various other holes”.

Determination won through, but after spending more time on the stand-up circuit Maddi started to find certain aspects of it disillusioning.

“I realised there was never a female comedian winning the competitions that I was going in for. They’re like ‘King Gong’, so you go in and they gong you off if you’re rubbish.

“And I just realised that women needed more time to get going. Women aren’t about one-liners, they’re storytellers, and they didn’t have — or we didn’t have — this platform to be able to tell our stories — which then come with humour and connect to the audience.

“I mean, fair enough, you can have a heckler and you can have a laugh, but they shout you down so badly at places like the Comedy Store that you just can’t be heard. And it’s not about confidence — they don’t even allow you to have confidence.

“So I just thought women needed this platform to be able to kind of be the comedians that they are — because I’ve heard them and I know they’re good! And they just need to be able to have that window.”

Since making its debut at the Kenton a year ago, the show has sold out the Soho Farmhouse in Great Tew, Oxfordshire, and been performed at comedy clubs in Birmingham and Redditch.

Following its return to Henley, Maddi plans to take the show to Stratford-upon-Avon and Chelsea, all the while continuing to refine it.

“Stand-up is like ‘In. Beer. Watch a stand-up. Go.’ Having worked in the clubs myself, that’s what you get from it — and I don’t want that.

“This is female, this is lighter, this is more enjoyable. You know, I just want it to be a proper show — I love the showmanship of it.

“I start this show in a cosy way, the next one. We won’t spoil the surprise, but that’s what I like, that’s what I want — people to walk out and say they’ve been to a show.”

This Show Does Not Contain Nuts starts at 8pm on Saturday, January 20. The performance will last two hours and 10 minutes, including an interval, and is billed as suitable for ages 18 and up.