Murder-mystery drama with a twist is delightfully brooding 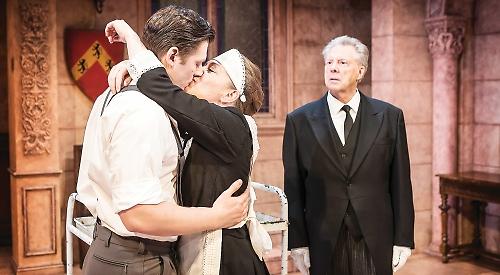 AT the ancient family seat of Marks Priory, overlooked by the family motto emblazoned in Latin and shields displaying various coats of arms, domineering yet aloof grande dame Lady Lebanon (Rula Lenska) is hosting a fancy dress ball when a guest is murdered.

As Chief Superintendent Tanner (Gray O’Brien) and Detective Sergeant Totti investigate, it becomes apparent that the lady and her footmen, Gilder and Brook, seem somewhat cagey and her son, Lord Lebanon (Ben Nealon), constantly feels that someone is listening — nicely punctuated by Gilder and Brook’s movements on stage.

Young Isla Crane, a relative and a semi-permanent house guest lined up by Lady Lebanon to potentially provide a son and heir, is composed by day but skittish in the evening.

With a whole host of characters including Lady Lebanon’s doctor, a roving gamekeeper, his wife the housekeeper and a world-weary butler, there was plenty for the audience to chew on.

With allusions to the mysterious nature of the late Lord Lebanon senior’s illness and demise, and Lady Lebanon waving money around seemingly to make her problems disappear, all the while displaying pride in her bloodline, the detectives tried to piece together the facts before the murderer struck again.

Julie Godfrey’s set design provided a solid and authentic mansion space for Edgar Wallace’s thriller to play out in, while Alex Stewart’s costumes were spot on. This production was brought up to date from its imperial origins, yet retained a certain timelessness.

Rula Lenska excelled as a brusque Lady Lebanon, with plenty of support from staff, guests and police.

With a brooding background and a sense that there might be several more victims before the evening’s end, the Classic Thriller Theatre Company provided lots of delights for a full house.