Edinburgh hit's back by popular demand! 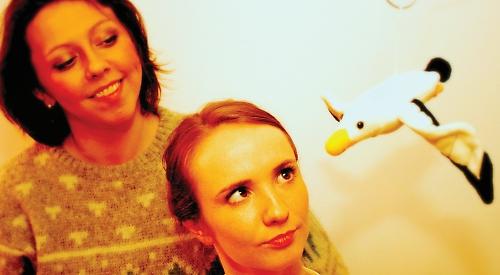 A ONE-act comedy drama that previewed in the barn of Goring’s Catherine Wheel pub before going on to enjoy a sell-out run at the 2014 Edinburgh Festival is back in town by popular demand.

Directed by Tim Schulz, 15% of The Seagull is the story of two women trying to produce their own version of Anton Chekhov’s classic play The Seagull with limited resources and completely unfettered enthusiasm.

Deserted by almost all her acting company, Liberty Martin is convinced the show must go on — accompanied by her one remaining cast member, Cheryl Mayer.

Following its original Goring run, the show’s producers have been receiving requests for a comeback ever since.

This time around the venue is Goring village hall but the Catherine Wheel is providing the bar for pre- and post-theatre drinks.

Liberty Martin plays Liberty, a young drama graduate convinced she was born to play Nina in The Seagull. Cheryl Mayer plays Cheryl, a girl with some time to kill between shifts at the chip shop and an innate ability to get things done.

Latest 7’s reviewer called the two-hander “an almost faultless production” while Broadway Baby said: “Mayer and Martin open up the possibilities of theatre by showing how much can be achieved with just two actresses, a few silly props and a very clever script.”

Director Tim Schulz said: “It really is a show for everyone — classic lovers to theatre novices… What better place for a revival of my favourite show, in my favourite village.”