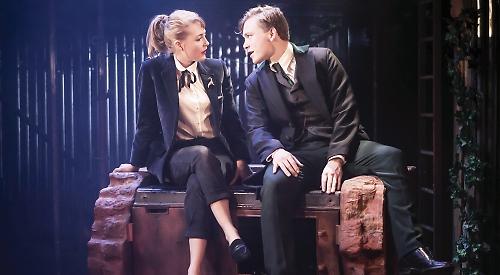 THE musical Teddy is billed as “the musical birth of a teenage revolution” and sets out to describe the social unrest that was the inevitable result of the austerity of
post-war Britain and spawned the cultural revolution that preceded the “Swinging Sixties”.

Led by Bill Haley and the Comets with Rock Around the Clock, the musical revolution that went with it introduced rock’n’roll to popular culture and the musical world and social mores were never quite the same again.

This production is an interesting and ambitious piece of theatre and the Watermill team pull it off with extraordinary panache.

The story is pacy and quickfire, told in narrative style by the two main protagonists Josie (Molly Chesworth) and Teddy (George Parker), both of whom give exceptional performances, particularly in the dance scenes.

And ambitious because it is almost a play of two halves — one being Josie and Teddy’s story of one night out that starts full of hopes and dreams and ends in disaster, and the other of the pulsating and infectious rock music, superbly provided by Harrison White, who is also the musical director (guitar and keys), Freya Parks (bass), Andrew Gallo (drums), and “rock legend” Johnny Valentine, played by Dylan Wood, whose singing lit up the show like a beacon.

Weaving these two elements together seems to have given writer Tristan Bernays a bit of a challenge but by and large it works and perhaps the show provides entertainment to a wider audience than just a play or a gig would have done.

The band are rarely off stage, contributing both rousing rock numbers and atmospheric background music throughout the show with a casual air that almost denies the hours of rehearsal that must have gone into such a tight and professional result. They were a joy to listen to.

The music evokes the era of the Teddy Boy very successfully, but perhaps rather less so the language of the two main characters, whose conversations sometimes displayed more education and sophistication than they would surely have had access to.

Perhaps the writer was using poetic licence to get his plot across? But be warned, there was little poetry in the rather excessive use of the F-word — seemingly the only adjective the characters knew — which might not be to the taste of some members of the audience.

Teddy runs at The Watermill until Saturday, February 10, when it goes on a UK tour before transferring to The Vaults in London. For tickets and times call the box office on 01635 46044 or visit www.watermill.org.uk