Drama's moving homage to a genius of sound and vision 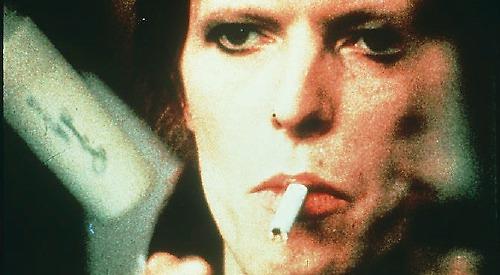 THE late, great David Bowie was aeons ahead of his time when it came to gender fluidity and chameleon-like identity changes.

Becoming a role model to many, encouraging kids to embrace their oddities and be comfortable in their own skin, providing comfort to many a misfit or outsider, he was also a genius of sound and vision.

This stark, austere and exquisitely acted one-man show is an homage to the sheer wonder and devotion Bowie inspired in his fans.

Specifically — and this is where things take a darker turn — Northamptonshire lad Martin, battling his own inner conflicts, who is sent on a mission on his 18th birthday to follow in his absentee father’s footsteps.

Martin has all the vinyl — his father’s vinyl — and is given a kind of pirate’s map to all the treasured locations of Bowie’s early years, and the clues as to what made his father tick.

Punctuated with distilled splashes of Bowie’s melodies, which were beautifully done, Alex Walton’s stage presence was powerful, moving and didn’t hold back, covering a spectrum from hope and exhilaration to exhaustion and futility, with some lighter comedic moments.

An excellent voiceover from comedian Rob Newman as Bowie was hauntingly believable — although if it’s light relief you’re after, Jemaine Clement’s Bowie in Flight of the Conchords never fails to delight.

While there was room for a little more of the music, and diehard Bowie fans might appreciate the references but crave more of the numbers, this was a spooky piece of theatre, with an appropriately oblique denouement.