Panto had us in Wonderland 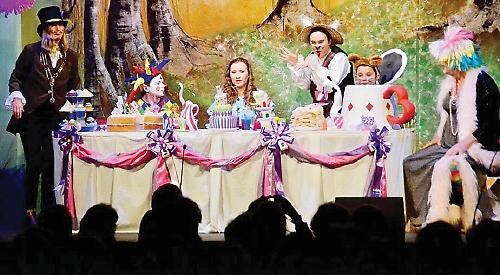 THE 16th production of the annual Shaddo pantomime did not disappoint!

Rosemary Appleby took the leap from performer to director and put on an evening of fun and frivolity in a show as ludicrous as you would expect — and hope — from an Alice in Wonderland pantomime delivered by the Shiplake and Dunsden Dramatic Organisation (Shaddo).

This outstanding production was enhanced by colourful costumes and exquisite scenery and props.

Alice (Amelia Harding), her mother the Dame (Terry James), for whom Kate Piercy’s make-up artistry deserves a special mention, and Wally the Joker (Ben Wilkinson) took us down the rabbit hole after a mesmerising opening dream sequence from the Berkshire and Henley Dance group.

The plot centred on the forthcoming wedding between the Princess of Hearts and the Prince of Diamonds (Josh and Emma Piercy-Fisher), the chemistry between whom was so believable it was almost as if they were married in real life!

Her terrifying but expertly played mother, the Queen of Hearts (Ellie Classey) dominated both the stage and her sycophantic husband (Peter Crowther) and brought some drama and fear to the audience. Meanwhile, the wonderfully evil Knave of Spades (Simon Classey) was set on ruining the nuptials, by marrying the princess and taking control of Wonderland at any cost.

With the help of the dimwitted Tweedle Dee (Liz James) and Tweedle Dum (Becky Ilderton), he almost had his wicked way and may have had it had it not been for the White Rabbit’s (Daisy Morgan) understanding of the cryptic, and at times confusing, plot!

Emily Linsell, Tiana Hannaford and Jessica Martin deserve a special mention for their portrayal of the Mad Hatter, March Hare and Dormouse at the tea party, which was surely as hilariously ludicrous and nonsensical as Lewis Carroll intended.