Mystical hound can be found at the Mill 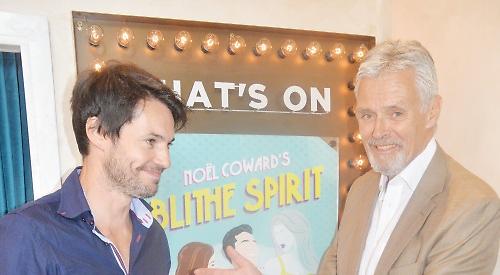 ARCHERS star Simon Williams is playing a different role this week — that of playwright.

The veteran actor from Bix, who plays smooth-talking but ruthless Justin Elliott in the long-running Radio 4 soap, has adapted Sherlock Holmes mystery The Hound of the Baskervilles for the stage.

Produced by his son Tam Williams and directed by Thomas Daley, the show opened at the Mill at Sonning last night (Thursday) and runs until Saturday, March 17.

Based on the novel by Sir Arthur Conan Doyle, the play centres around an age-old curse... and a ravenous monster. Can Holmes and his friend Dr Watson solve
the terrifying mystery before it’s too late?

When Sir Charles Baskerville dies in strange circumstances with a look of fear and terror on his face, rumours begin to fly.

Legend has it there is a curse on the family — in the form of a gigantic, ferocious, glowing hound of hell that brings death to each successive head of the Baskerville family.

Understandably, then, when Sir Henry Baskerville returns from overseas to claim his inheritance and property on the treacherous terrain of darkest Dartmoor, he calls on the renowned Sherlock Holmes to help him solve the riddle of his uncle’s violent death.

Is there really a revenge-seeking hound? Or is there some other evil at work?

A spokesman for the Mill at Sonning said: “The producer and director have devised many ways to bring the eeriness of the moors into our auditorium. You will feel the presence of the mystical hound right next to you. If you like to be scared, believe us you will be!”

For more information and to book, call the box office on 0118 969 8000 or visit www.millatsonning.com