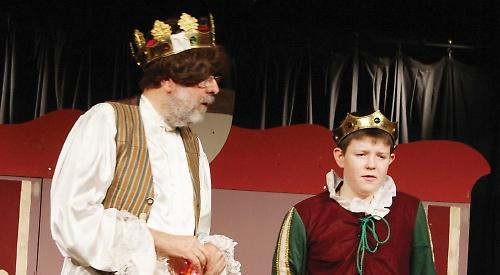 FOR their 53rd consecutive annual pantomime, which played for six performances on the last weekend of January and the first in February, Woodcote Amateur Dramatic Society performed The Emperor’s New Clothes, based on Hans Christian Andersen’s classic fairy tale.

The well-known plot proved the perfect vehicle for the usual panto fun and frolics, with a slight alteration for family audiences — the Emperor reduced to his underwear!

Unusually for pantomimes there were no evil villains to boo and hiss, but there were two “con men” who saw the prospect of riches in the competition to make the emperor a suitable outfit for the annual parade.

John Worsfold and Lindsey Thomas were at the top of their game as Nip and Tuck — the supposed tailors whose phantom costume could only be seen by “intelligent people”. They exploited every comic opportunity to the full, much to the audience’s enjoyment.

Patrick Thomas was perfectly cast and credible as the absurd, foppish, intellectually challenged Emperor Fancypants, who had bankrupted his kingdom through his fashion obsession, much to the chagrin of his exasperated Lord Chancellor, Boracic, played by Peter Saunders.

Heather Simpson as Valium Crock-Pot and Elizabeth Thomas as Prozac Pampers added to the air of farce as the two rivals, reminiscent of Cinderella’s ugly sisters, with a love-hate relationship, vying for the hand of the emperor’s son, Prince Jack. They played it for all it was worth and the audience loved it.

The love interest came in the shape of Prince Jack who falls in love with the lowly seamstress, Taffeta. Alexander Burton, making a highly promising debut for WADS, and Chloe Page made a charming couple, and sang their duet with feeling.

The continuity was provided throughout by two characters — Patch, the Emperor’s valet, and Fairy Fabric. Andrew Henderson, fast developing into one of the society’s most accomplished performers, was delightfully camp and ironic as the valet, and Marion Piggott kept the audience participation going throughout.

It would have been remiss to leave out Keith Ashby and he made a cameo appearance as the court jester. Keith has been in every WADS panto since they began in 1965 and he didn’t disappoint.

All the other performers, including the chorus, contributed well to an enjoyable production, produced to a high standard by Marcia Spiers and Sandy Worsfold.

As usual, the costumes fitted the production perfectly, as did the sets. The scene in the Witch’s Emporium was particularly spectacular.

The musicians and the lighting department also contributed fully to the quality of the production.

Like many village organisations up and down the country, WADS survive with relatively few members and yet their productions never disappoint.

What a shame it would be to lose this society, which is so good for village morale. I’m sure they would love to hear from you if you can offer your help in any way. For more information, visit www.woodcotedrama.co.uk