Influence of the BBC's 'Sherlock' may be detected 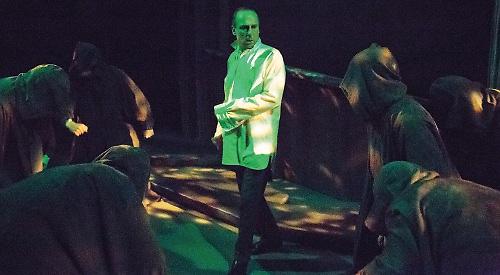 The Hound of The Baskervilles |Mill at Sonning | Thursday, February 1

SHERLOCK Holmes and Dr Watson can never go back after Benedict Cumberbatch and Martin Freeman so radically changed our view of them with their BBC One series.

Playwright Simon Williams clearly recognises that in his adaptation of Conan Doyle’s The Hound Of the Baskervilles.

Simon, Archers cast-member, acting grandee and local celebrity, has laced this production with jokes, sound effects and knowing asides suitable for the modern age. He has injected humour and irony into what used to be a stern and implausible Victorian detective yarn.

And together with his son, Tam Williams, who initiated the direction, and Thomas Daley who completed it, they have turned that implausibility from vice to virtue with laugh-out-loud incidents and mock shocks to keep us entertained.

It may be Sherlock Holmes in name but this show belongs to Darrell Brockis’s Watson. He is sunshine to Holmes’s cloud, warmth to his ice, life to his arrogant intellect.

Brockis is funny and sympathetic with terrific timing and presence and he makes this play happen.

The show is never short of an interesting moment — be it movement, dialogue, gothic sound and lighting effects or a straight knowing joke. And when we get to finally see the hound there is some fine puppet-work making a frame of wood and ragged cloth appear convincingly ferocious.

We could be at the Royal Court rather than the Mill. Then Holmes wakes up from this nightmare and Watson warns him not to take cocaine after dinner — and we know that we are not to take anything on this night too seriously.

The stage design is intriguing if dour: the front is left virtually bare for interior scenes while the rear is a raised, sloped platform to represent the brooding Dartmoor where the eponymous hound roams.

Perhaps a little more stage decoration would have been appropriate but, as usual with the Mill, they use the space well — and often athletically.