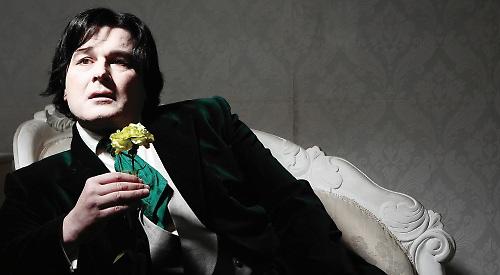 Nearly 120 years on from his death in exile in Paris, Oscar Wilde’s trademark wit remains as distinctive as ever.

The poet, playwright and author’s own tale may have ended in tragedy but his stories and sayings continue to echo down the ages.

In De Profundis, the long letter “from the depths” that he wrote to his lover Lord Alfred Douglas from his cell in Reading Gaol, Wilde said of himself: “The gods had given me almost everything. But I let myself be lured into long spells of senseless and sensual ease.”

Upon his release in May 1897 he sailed at once for France, where he wrote his last work, The Ballad of Reading Gaol, a long poem reflecting on the harsh rhythms of prison life as he experienced it.

Now both of Wilde’s last works are to be performed on the stage of the Kenton Theatre.

Wilde Without the Boy is a dramatisation of De Profundis by the award-winning writer-director Gareth Armstrong.

Opening on Monday (February 12), the show is running for four nights at the New Street theatre, with Marlow-based actor Gerard Logan playing Wilde.

A previous collaboration by Armstrong and Logan — a staging of Shakespeare’s narrative poem The Rape of Lucrece — saw The Stage newspaper name Logan “Best Solo Performer” at the 2011 Edinburgh Festival.

The pair’s latest show is one of two halves, as Logan explains.

“In the first half I do Wilde Without the Boy. That runs at an hour. And then in the second half, after an interval of about 15 to 20 minutes, I do the full poem of The Ballad of Reading Gaol.

“It’s a performance of it done to an original soundtrack by Simon Slater, who works with the Royal Shakespeare Company — he’s absolutely brilliant.

“And we set the Ballad in Paris. After Wilde’s left prison he’s sat at a café on his own and then he’s taken off into this memory...”

Performed complete and unabridged, the poem runs for 35 minutes.

“With De Profundis we’ve had to cut quite a lot of that book back to get it down to an hour,” says Logan.

“We’ve got it down to an hour only because Edinburgh [where the show was first performed] has this imperative that shows have to be an hour long. But what we’ve got — the cut version — certainly captures the true essence of it. And the beginning, the middle and the end.”

As Logan tells it, Wilde Without the Boy came about following his and Armstrong’s success with The Rape of Lucrece.

“I love working with Gareth — his mind is absolutely brilliant. We’d done The Rape of Lucrece and I said, ‘Well, the only other thing that I’ve ever thought I’d love to do a solo show with is De Profundis.’ So we sat down with it over the course of about a year — and we both just absolutely adored it.

“With a very heavy heart we had to cut bits and then move some bits from certain places in the letter to others, to have it really contrasting well with what he was talking about. We basically just wanted to get out of its guts its theatrical essence.” Since first being performed at Edinburgh in 2014, Wilde Without the Boy has been staged “hundreds” of times according to Logan, who trained at RADA straight after leaving school.

But regardless of how many performances he has done, the nature of the material means that Logan always believes it can be done better the next time around.

“The thing to remember is that the letter, as well as being a letter, it is a work of art — coming from one of the greatest minds ever. This is something that Gareth was very big on. I mean, I knew it, but I had to be reminded of it constantly.

“Whatever justice you think you’ve done to the piece, you’ve got to be very hard on yourself and go ‘Yes, but there’s so much more there.’ You know, this man visits shores of imagination that I can’t — unless I try really hard to get up there with him, I can’t go there.”

Having staged solo shows based on the works of both Wilde and Shakespeare, how do the two titans of the English stage measure up to one another?

“I was speaking to Alex, my wife, about this last night. Lady Windermere’s Fan is still my favourite play. Even out of any Shakespeare. Oh yes. For a start, I find it achingly romantic, which could only have been written by someone with the hugest of hearts.

“When I was doing it years ago, before I was doing any solo shows whatsoever, I remember feeling that every night when I came off stage it was like I was just full of this — I don’t drink at all but the best way to describe it would be that I just felt that I’d drunk the most incredibly exquisite champagne. But even champagne can have negative side effects and this didn’t have any — I felt augmented by it.

“That’s the play with his famous quote, in which Darlington says — and I was playing Darlington — that ‘We are all in the gutter, but some of us are looking at the stars.’ And in De Profundis he touches on this as well. This was someone who really, really looked at the stars.

“I know I’m not saying anything new here, but when you feel you’ve come into the presence of someone like that, which you do with that play, it just awakens maybe areas of your mind which have been roped off sleeping into possibilities and compassion and love and not being judgemental.”

Logan, who is 55 but looks far younger — “I always say to people that I’ve got a particularly decrepit portrait in my attic” — says that touring performances of Wilde Without the Boy are in the calendar for the rest of the year.

“I might take a few months off at some point but I plan on doing the show till the day I die, whatever else I do, because it’s just an honour to say those words.”