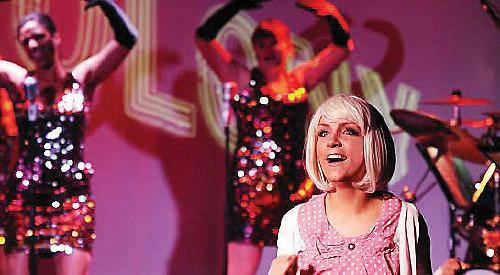 FRESH from staging a fabulous neon-lit tribute to Elvis, the Theatre Royal has brought us a tribute to a more understated musical icon — yet one who has been ever present in the background all along.

Forever Dusty, in which Strictly Theatre Entertainment presents the story of Dusty Springfield, is a real eye-opener: a moving biopic and talentfest all rolled into one.

Popular culture seems to have embraced Dusty in specific timeslots, like rediscovering a hidden gem, as after her initial success she then hit the big time again with the Pet Shop Boys in the Eighties and saw a resurrection of Son of a Preacher Man thanks to Pulp Fiction in the Nineties.

This musical takes us back to the beginning, when Mary Isobel Catherine Bernadette O’Brien found her voice and sang with her brother in trio The Springfields, with the third member soon to be replaced by local lad Mike Hurst (a little bird told me he may have seen the show; I hope he enjoyed it as much as we did!).

From the early days of appearing on Ready Steady Go! to falling for American soul music, and an American soul sister, we learned of how Dusty’s anti-apartheid stance got her hastily escorted out of South Africa and how her ability to cross racial divides extended to her audience appeal.

There was a melancholy in her use of alcohol as a crutch, mental health issues and inability to fully and publicly embrace her partner, but her sexuality was sensitively portrayed — and made for some great duets and power ballads.

Interspersed with actual photos, newspaper cuttings and background scenes on film, there were some enjoyable montages alongside the top tunes, as well as little insights into her psyche. These showed us a rollercoaster of high times and low, culminating in her final goodbye at St Mary’s Church in Henley.

With the support of backing band the Memphis Cats and a multi-tasking cast, Katherine Ferguson as Dusty and Mvula Tampa as her lover Clare showed panache and flair, with convincing passion, thoughtfulness and emotion, fantastic Sixties and Seventies outfits.

And of course the hair has to get a mention — kudos to Katherine for that spectacular bouffant-beehive-flip do.