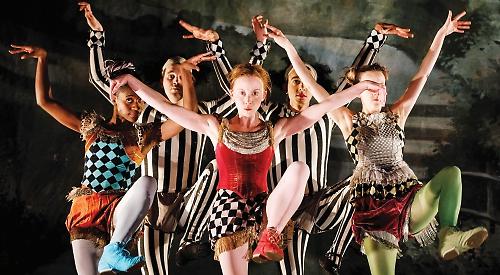 AN explosion in a fantasy factory best sums up The Little Matchgirl — and it’s none the worse for that.

Movement, puppetry, great music and storytelling combine and the only thing to do is sit back and revel in the ride.

The show has a strong pedigree, coming from the Globe Theatre and the Bristol Old Vic, and taking on the stories of Hans Christian Andersen is always interesting — not least because of their frequent darkness.

But the show is directed and part-devised by Emma Rice and this reviewer came fully prepared for her wrecking-ball approach to theatre.

Instead I got a show ideally suited to Ms Rice’s anarchic talents — you can have a lot of fun and invention in fantasyland and there’s little to destroy because it’s all so elusive.

So she does a cracking job on this series of three fairy tales wrapped up in the sadness of the little matchgirl herself.

There is darkness aplenty in this show because Ms Rice likes to hammer home her political points, usually without subtlety and in the form of uncomplicated rhyming couplets. But they are points worth making: here, the little matchgirl is an impossibly appealing puppet manipulated by puppeteer Edie Edmundson.

I was quite ready to believe this fabrication of wood and latex actually had facial expressions.

She is surviving in the London Christmas cold by selling the heat from her matches and thriving on the stories told with each one — until there are no more matches.

There are blunt messages throughout about poverty and deprivation, haves and have-nots, easy and hard living. They are made through childlike storytelling — but there is an honesty in that which makes this work. And when combined with the human desire for stories, dance and music it becomes irresistible.

We are shocked by the Mole’s predatory attack on Thumbelina and charmed by her romance with the Swallow; we laugh uproariously at the Emperor’s New Clothes — a very funny body suit for this, by the way — and wince at the controlling prince as he tests his bride.

In the end we despair as the matchgirl’s last flame dies out and she crumples to nothing while the other world of unknowing consumers carries on around her.

A special mention for Niall Ashdown, who holds the production together from beginning to end with a mixture of acting, singing, movement and occasional stand-up.

And another special mention for the three musicians: they’re on stage throughout contributing to the drama variously but these are not the normal run of the mill actor/strummers, they are the real deal. And the music sometimes opens into gloriously harmonised folk-ballad.

So, in short, a really really good show to challenge, inspire and maybe make you cry.