Panto producers are ready to get cracking on Dick Whittington 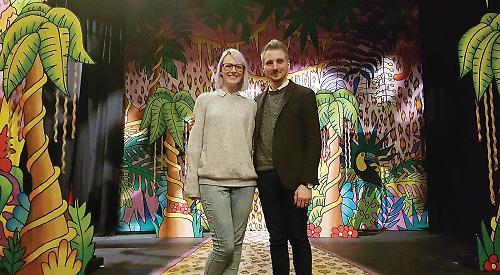 THE people who brought you Robin Hood at Christmas are already hard at work creating this year’s Kenton Theatre panto.

Friday night saw James Tobias Clifford and Rochelle Parry of the Immersion Theatre Company announce that Dick Whittington would be the 2018 production.

They were speaking at the end of the sold-out first night of The Jungle Book — another of their shows at the New Street venue.

Tickets for the show had gone on sale earlier that day — the earliest that any Kenton pantomime has ever gone on sale by a whole six months, according to the theatre’s programming manager Tom Ryan.

He said: “Packed with hilarious routines, heaps of audience interaction, spectacular sets and a host of chart-toppers, this high-energy exciting story about a young man seeking his fame and fortune among the bright lights of the big city promises to be the perfect Christmas treat!

“Dick Whittington will run for 24 performances from December 15 to 29. Having listened to customer feedback we’ll have less shows on during the school term and will be doing
three shows a day on Boxing Day and the weekend immediately before Christmas, giving even more people the chance to come on what have proved to be our most popular days.”

Mr Ryan added that a gala evening would be held on Friday, December 21 — the shortest day of the year — but this has now sold out.

Dick Whittington is one of the earliest Christmas show storylines still performed today, with the earliest recorded panto version dating from 1814.

Time-honoured though it is, this is the first time that Immersion Theatre will have produced the show — so they are tailoring it especially for the Kenton.

Speaking on Friday, Mr Clifford said: “No, we haven’t done it before — so it’s one that I’m going to write specifically for the people of Henley!

“Robin Hood was great fun but this one is going to be even bigger and better.

“But I think there’s something really traditional about this one and there’s a really fun way you can inject a sense of energy.

“It’s just one that I’ve got some really exciting ideas for and I’ve realised that for a Henley audience it will go down a storm.” The town famously had an MP who went on to be Mayor of London, but whether he makes it into the storyline in any way remains to be seen.

Mr Clifford added: “What I love is that I think King Rat’s just such a fun villain. And then you’ve got Tommy the Cat, you’ve got the Dame, and you’ve got the Fairy of course — so you’ve got all the best ingredients for a panto there.”

How long does he reckon it will take to write the script for Dick Whittington?

“Some pantos obviously come easier than others but I think I’ll be working on it for about three to four months. But you’re already starting to develop the sets as soon as the venue’s confirmed — which the Kenton is — so next week I’ll be getting in touch with our designers — because everyone gets booked up and I want to make sure we have the best of what we can get rather than leaving it to the last minute.”