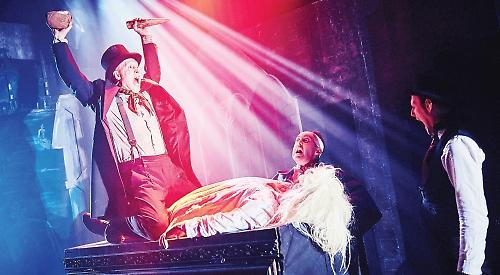 THEY say you have to know the rules to break the rules, and that knowledge was self-evident in this flawless production, packed with cleverly created, well, flaws.

In the spirit of The Play That Goes Wrong, the talented comic team of the fabulously named Le Navet Bete, with Nick Bunt as Van Helsing and Al Dunn, Dan Bianchi and Matt Freeman playing an array of roles, including Jonathan and Mina Harker, Dracula, Lucy Westernra and her beaus and the deranged fly-eating Renfield, took us on an alternative viewpoint of the story of Count Dracula.

A riot of fun ensued, from depictions of sea legs to prim ladies and puzzled prisoners to a slick Count Dracula, or not.

With audience numbers slightly depleted due to the blizzards going on outside, those who made it in were rewarded with slapstick of the highest order in a show that romped along at a fair old pace, making us giggle and gasp with its inventiveness. There were some fine tunes to boot.

With misread and ill-timed lines, misbehaving stage props and some audience interaction, this was a treasure trove of comedy gems. Nick, Al, Dan and Matt lifted up the hem of theatre and showed us the seams, treating us to a box of delights, where flying out of windows became a logistical nightmare, sets were borrowed from other local touring Dracula shows, and the cracks were visible.