Wartime drama brings out the best in young actors 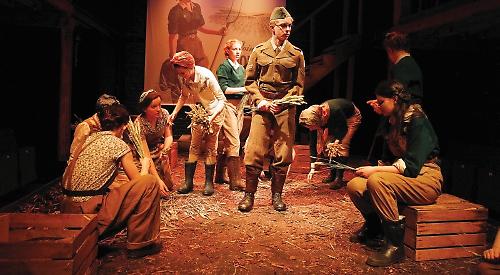 THIS production of Danielle Pearson’s Digging for Victory combined a number of highly attractive ingredients — notably a nostalgic WWII setting and a missing person mystery.

Add dance, music and the energy of the large cast of young actors and you have a winning theatrical recipe.

The Linnet sisters — Joyce (Josie Embleton), Vera (Joely Hopkins) and Beryl (Fern Speakman) — venture out from blitzed London to the Kent countryside to work as landgirls on Notts Farm.

Disgruntled Joyce forges a friendship with Mabel Eldridge (Thea McLaughlin) as they bond over crime writing, especially a mutual admiration of Agatha Christie.

When Mabel appears to go missing, amid rumours of a spy in the village, the sisters suspect the worst and embark on a quest to find her.

They enlist a young home guard, George Hawkins (Asher Dunnett) to help them solve a set of riddles supposedly leading to missing Mabel.

But there are dark horses, false leads and plenty of misunderstandings, so it’s an unexpected explanation that finally emerges from the clouds of intrigue.

Organising a cast of 28 in the intimate theatre space of the Watermill is no mean feat. The production exuded energy through much lively movement and great attention was given to choreographing exits and entrances, especially during the comical chase scenes in pursuit of an escaped pig.

The acting space is extended by imaginative use of the aisles, creating quite an immersive experience for the audience. There are also some impressive group scenes, particularly in the air raid shelter.

The music and dance, together with authentic costumes, evoked a sense of the period. The terror of air raids was realistically conveyed through clever lighting and sound effects.

What makes Digging for Victory a highly appropriate play for young actors is that it’s essentially about new challenges — something all young people face on a daily basis.

The displacement that war brings is not ignored — the Linnet sisters have to find their feet in a new environment and undertake hard, unfamiliar work.

But the harsh realities of wartime were balanced in this production by a gentle and pervasive humour — a prime example being Harry Forkin’s marvellous comic turn as dodgy shopkeeper Arthur Winterbottom.

Anyone watching this production will have nothing but praise for an accomplished young cast who work together effectively as a team.

It’s impossible to acknowledge all the individual talent. However, it would be wrong not to highlight the leads playing the Linnet sisters, who hold the audience’s attention throughout.

Credit is also due to Alex Parsons as the formidable Nancy Nott. It is very heartening that enthusiastic young actors, have the opportunity to perform in this highly professional setting.

I left the Watermill Theatre with a smile on my face. It’s an enchanting venue — even the geese on the lawns offer a warm welcome.

This highly entertaining production in charming surroundings added up to a very enjoyable evening of theatre.