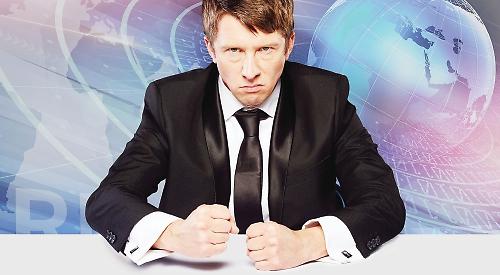 A SATIRICAL television reporter whose online videos have reached a worldwide
audience is starring in his own show in Reading.

Jonathan Pie is touring Back To The Studio, which will touch down at the Hexagon on March 29, as he attempts to host a night of serious discussion on current affairs while simultaneously attempting to smash the system from within.

It comes as the frustrated newsman’s online video in response to the election of American president Donald Trump has now been viewed more than 150 million times.

Written by Tom Walker, who plays the man himself, and Andrew Doyle, this latest production sees Pie return to what he does best — and he’s angrier than ever.

“He’s pretty good at his job but the moment the cameras stop rolling he can’t help but rant about the state of the world — and he is quite fond of what some might call ‘colourful’ language.”

Walker had worked as an actor for about 15 years but a lack of work made him mull over the idea for a character he hoped would challenge audiences. “I just wondered what real news reporters do when the camera stops rolling,” he said. “The politics was secondary at the start but now it’s front and centre of almost everything I do.

“What’s great about a live show is you have much more time to explore ideas. So it’s great to play with the audience’s expectations.

“It’d be too easy to stand there for an hour and hurl insults at Trump or the Tories. Trust me, I’ll be doing a lot of that, but I also like to challenge the audience. Hold a mirror up to them and show that us lefties don’t always get it right either.”

Walker’s social media videos have brought him universal appeal as well as more than one million “likes” on Facebook. “One random October day in 2015 one of my videos went viral and this has been my job ever since,” he said.

“The video I did after Trump was elected has been viewed more than 150 million times, which certainly gave my numbers a bump. And more recently the election solidified my following with several videos going viral.

“To the younger generation, Pie’s brand of angry political satire seems new and original,” he says. “But if you go back to the Thatcher years this sort of thing was mainstream, which is why the older generations really get it and love it also. So to some it’s brand new and original and to others it’s old and familiar. Like an old blanket.”

But with so much going on in the world of politics, including the ongoing debate over how the UK should leave the European Union, Walker admits it’s difficult to write a live script that can be easily understood.

He explains: “You have to work out why Pie would be in a theatre talking to 1,000 people. You then have to find a way to explain who he is for people who have been dragged there and have no context as to who this person is.

“You then have to write some jokes and, most importantly for Pie, you have to have something to say. You want people to go to the pub after and talk politics and dissect the show.

“You want every audience member to have had their worldview challenged in some way. You then litter the script with some inventive swearing. A live hour-long monologue has to be much more authored and nuanced than a three-minute monologue. So it’s a different kind of writing.”

Walker’s debut live show last year began at the 70-seater Leicester Square Theatre studio space and was such a hit that it went on to a sell-out run at Edinburgh, followed by a huge national tour including two sell-out shows at the Shepherds Bush Empire and ending with another sold-out show at the London Palladium.