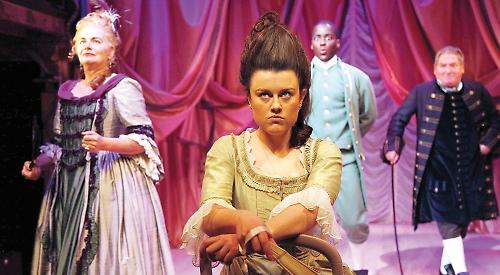 WHATEVER The Watermill Theatre at Bagnor does you can be assured that it will do it well — and their current production of Sheridan’s classic comedy The Rivals, brilliantly adapted by Beth Flintoff, more than confirms your expectations.

First impressions are always important, and even before the play starts the scene of 18th century Bath is most effectively conveyed by the comparatively simple set of flamboyant pink satin curtains, used to splendid effect throughout the production — a masterstroke by designer James Cotterill.

Written in 1774 when Sheridan was only 23, The Rivals was a groundbreaking return to the comedy that theatregoers of the day really loved — that of social comment and the sexual mores and vices that were the red-blooded undercurrent of “polite” society.

The Watermill’s adaptation wrings every ounce of delight out of the original text — with an absolutely stellar cast headed up by Julia St John as a wonderful Mrs Malaprop and Michael Thomas as Sir Anthony Absolute, who manages to achieve credibility while delivering ridiculously funny lines in a way that could only be done by the most experienced and able professional.

But that’s not to imply that any member of this amazingly good cast should be singled out. It would be impossible to write a review of the whole cast’s performances without peppering it with superlatives.

Ncuti Gatwa (certainly one to watch) was charming and engaging as Jack Absolute, Emma Denly a delightful Lydia Languish, Charlotte Bate gained our sympathy as the long-suffering Julia, and Daniel Abelson was an entertainingly “mummerset” Bob Acres, while James Mack’s Faulkland actually produced groans from the audience with his inept mishandling of his romance with Julia.

And meanwhile Christopher Logan as a very Irish Sir Lucius flitted in and out of the action making mischief for everyone.

Director Jonathan Humphreys didn’t miss a trick for comic effect. Even the minimalist scene changes were accompanied by a quizzical glance, and the action occasionally involved members of the audience to good comic effect, while music by Simon Slater enhanced the spirit of the piece enormously.

Apparently the young Sheridan wrote The Rivals specifically to make money, and with a production of this quality one can only hope that it does the same for the Watermill. They deserve it.

The Rivals runs until Saturday, April 21. For tickets and times call the box office on 01635 46044 or visit www.watermill.org.uk