War may be exploited — but it can never be controlled 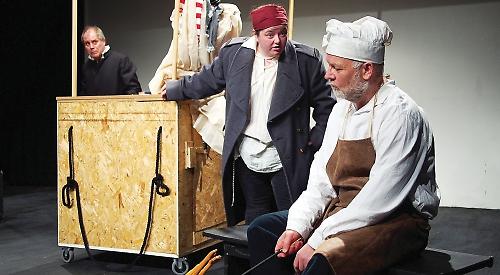 BERTOLT BRECHT’S Mother Courage is a classic piece of theatre exploring some deep and important ideas about war.

This production, directed by Rhys Lawton and Rachel Taylor, does not sanitise or shy away from any of those provocative ideas.

Serious themes of violence, deprivation and survival are covered in the drama, top-dressed with plenty of verbal and physical humour.

The pivotal role is Anna Fierling, Mother Courage herself. Beckie Moir gives a very strong performance as the loquacious Courage, a profiteer and a larger than life character, a bit rough around the edges.

What makes the audience warm to her is her steadfast love for her daughter and two sons (Max Hijmering and Jack Hygate) and her attempts to sustain and protect them.

Moir has enormous stage presence. It is down to Moir to voice many of the key ideas in the play, such as that poverty and courage go hand in hand.

Her delivery is fluent, lively and convincing; she is both funny and poignant.

Mother Courage’s family life centres on the wagon they drag across 17th century Europe, scratching a living selling commodities to soldiers and hangers-on.

Mother Courage exploits war, but in the end war destroys everything she holds dear.

Arguably, the most demanding role in the play is the one which requires no lines to be delivered by the actor. Mother Courage’s daughter Kattrin is mute. Taylor Rupp superbly conveys the young woman’s determination and frustration as she struggles to communicate without words.

Rupp ably uses mime and body language to get her meaning across and manages to move and entertain the audience without saying a thing.

Paul Gallantry as the chaplain and John Turner as the cook are convincing as adult males who have their merits but who cannot fully be relied upon.

Well done to a supporting cast of all ages, who combine their efforts for a production in true Brechtian style. They tumble onto the stage from all directions; they sing; they dance; they interact with the audience.

You never forget you are in the theatre, yet the basic set allows you to concentrate on the story the actors are telling.

Mother Courage is a politically charged drama with obvious resonance in today’s world. This play is a robust comedy with serious underlying messages.

Ultimately, though, humour cannot mask the sorrow that war brings and this thoughtful production sends you away with that message.