Christie sans manor house is as taut and engrossing as ever 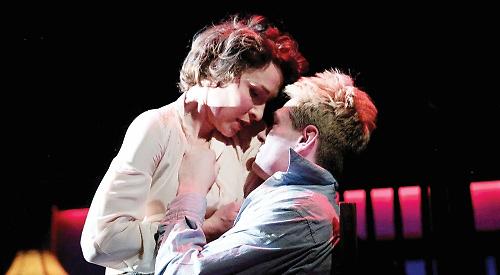 AGATHA Christie, then: formulaic, two dimensional, not so much writing as typing with clues?

Absolutely not on this showing. Love From a Stranger is taut and engrossing from beginning to end.

Perhaps it’s not fair to label Christie the Queen of the Manor House Denouement, but it’s what we’ve come to expect from the screen adaptations of her work — always a detective of some sort and a house party.

None of that is in this production, which explores the character and relationship of whirlwind lovers Cecily Harrington and Bruce Lovell.

The set from Mike Britton is claustrophobic and cleverly shifts about as moods change.

It opens in a poky upstairs London flat and moves to a down-at-heel remote country cottage.

Oliver Fenton’s lighting and Richard Hammarton’s sound work in concert with that and fine acting to lead us steadily to the end and our own conclusions — only to be upended with a terrific twist.

We learn a lot about these people along the way. Helen Bradbury’s Cecily is a restless soul who’d been engaged to a man she hadn’t seen for three years. She yearns for excitement and adventure and suddenly it turns up in the shape of Sam Frenchum’s Lovell, a romantic chancer with a silver tongue which quickly gets to work on Cecily. In more ways than one, judging by one scene.

The play is filled with wit and charm in its early stages, then fretfulness and suspense towards the end. It plays upon just about every emotion in a masterful piece of manipulation from director Lucy Bailey.

Yes, there are clues, and they are laid so well in the narrative that you simply clock them and move on.

Christie is said to have been fascinated by the idea of liars and wanted to write about them. We would call them sociopaths these days but the symptoms remain the same — disregard for all except the self.

But that’s delving into psychology and while it forms an essential part of this story it’s still a top class drama.