Stoppard’s masterpiece still brings so much to the table 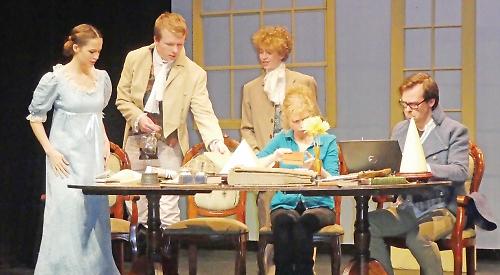 TOM Stoppard’s Arcadia has often been shouted about as the greatest play ever written, the best play of the 20th century, and so on.

But isn’t that like saying one artist’s painting is the best ever? It’s just not possible. Time moves on and life and art must move with it. There is no “ever” — it is an ever-shifting horizon.

Billed as a serious comedy about science, sex and landscape gardening, Arcadia sees Stoppard contrasting the thinking of the Romantics and the Determinists.

Set in one room of Sidley Park, an English country house in Derbyshire, the action of the play takes place in both 1809/1812 and the present day. The activities of two modern scholars and the house’s current residents are juxtaposed with those of the people who lived there 200 years ago — helped by the fact that both sets of characters are shown using the same table.

The cast clearly understood Arcadia in all its complexity and brought out the humour in every line. Is it the cast? Is it the director (Darrell Poulos)? Or is it some magical combination thereof? Special mentions must go to Alek Auton (Thomasina), only 17, Elliot Fielder (playing the autistic Gus/Augustus) is just over 15, as is Milly Thomas (Chloe). These young actors certainly make their mark in their various roles.

Harry Petrie (Septimus Hodge, Thomasina’s young tutor) makes the most of his role of a delicately raunchy young man with an eye to the next chance while maintaining an oh so respectable exterior — and having the embarrassment of explaining a carnal embrace to his innocent young charge. Their lines are always well paced and well delivered.

Tim Harling (Bernard Nightingale), the spurious academic, fills the stage with his presence and prattiness — perfect!

A very special mention must go to Ioan Havard, who took on the role of Valentine at very short notice. Either he knows this play very well or he learns really fast but he certainly understood his character and his back story and gives a generous, drily entertaining performance.

Like so many of the cast, his body language was stupendous. Hang the text: I’d go to see this production again merely for the pleasure of watching everyone’s body language.

There is not one weak member in this cast and they all deserve special mentions — not forgetting Shelly Gilbert, the magnificent tortoise, making her debut performance and not disgracing herself once on stage.

You will laugh, you will sneer, you will see some of the best performances that the Kenton Theatre has ever hosted.

Book your tickets now if only for the pleasure of seeing so much superb acting and enjoy it on whatever level suits you — it’s well worth an evening of your time to see a rare performance of this much-vaunted Stoppard play superbly performed right here in Henley.

Until Saturday. Evening performances are at 7.30pm nightly and there is a 2.30pm Saturday matinée.