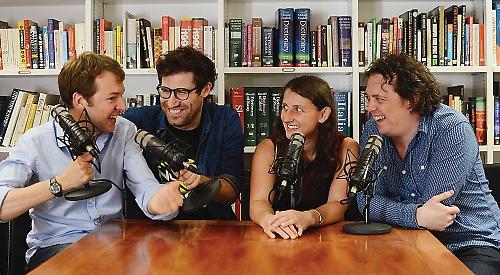 THEY’RE the brains behind the long-running BBC Two panel show QI who released the first year of their podcast No Such Thing as a Fish as a vinyl LP after it racked up more than 1.2 million downloads a week.

December saw literary spin-off The Book of the Year riding high in the Christmas bestseller lists after it promised readers a glimpse of “the weirder side of 2017”.

Now the show’s four-strong team of presenters are bringing their fact-finding talents to the Concert Hall in Blagrave Street, Reading, after their UK tour was extended by popular demand.

The show includes a live recording of the podcast itself — as well as a first half featuring the most astonishing facts the team have unearthed in the past 12 months.

Co-host Dan Schreiber says: “This is massively exciting for us. We started as four dorks sitting around a single microphone trying to make each other laugh.

“Things have changed a bit since we started — we now have four microphones — but it’s a thrill to know there are hundreds of thousands of other people who love the same wild and hilarious facts that we do.”

Many people in the audience will not need to be told that the podcast’s title relates to a famous claim made by the biologist and bestselling author, Stephen Jay Gould, who after a lifetime of studying fish concluded that there was no such thing.

He reasoned that while there are numerous sea creatures, most of them are not closely related to each other — for example, it turns out that in evolutionary terms a salmon is more closely related to a camel than it is to a hagfish.

Such fascinating facts are meat and drink to the presenters — but why do they think the show works so well in a live setting?

“It’s really nice meeting fans who are basically just the same as us,” says Anna. “They’ve usually got more interesting facts than we have! We also have drinks with them afterwards. It’s great engaging with them and getting the confirmation that there are actual humans out there listening to the show.” James adds: “Yes, it’s really good to see our fans face to face. We read about the numbers who listen to the podcast. But to believe those numbers you have to see that those people actually exist. Otherwise it could just be my mum pressing the play button seven million times.”

Each episode of No Such Thing as a Fish sees the team taking it in turn to present their favourite fact that they have come across that week. But how did the idea of the podcast come about, given that the first episode of QI aired in 2003?

“It’s us genuinely having a conversation,” says Andrew. “The whole thing grew out of a conversation James and Dan were having about the number of men in the world with two penises [600, apparently]. They came to the realisation that these facts were too interesting to stay inside the office.”

James agrees. “There were so many extra facts that were never used on QI — they were just going to waste.”

While there’s no magic formula for what makes a successful podcast, the shared chemistry of the four presenters seems to be key to the continuing popularity of No Such Thing as a Fish.

“The vibe we’ve kept hold of is that it’s like the chats we have in the pub,” says Dan. “That’s what it is — it’s a really good pub conversation. When people press ‘play’ on a second episode, that’s the equivalent of ‘Let’s get another round in. I want to keep going.’”

Like its parent programme QI, the podcast is enhanced by the feedback received from audience members — something that is equally true of the live shows. “We have very good audiences,” says James. “Very few of them have never heard of us. We’re not like an unknown comedian who goes on stage and has to ingratiate himself with the audience. Our audience are ready to geek out with us. They are very keen to be part of the conversation and tell us their own facts. In Guildford, for example, a dragonfly expert corrected us and told us where they really live.”

Anna adds: “We even employed a member of the audience who still works for us now. She sent in a fact about Clark Gable and Cary Grant meeting the day after Christmas every year to exchange monogrammed gifts they didn’t want.”

Is there a difference between what the team do in the QI office and what they do live?

“The live show is not even an idea,” admits James. “It’s just four people chatting about facts. But the audience really reacts well to it. It is true, though, that the live dynamic is different from our work in the office. When you’re doing a live show, you’re under more pressure to get laughs.”

When it comes to analysing the reasons behind the huge popularity of their podcasts, the team are not short of theories.

“We have surfed a wave of nerd culture,” reckons Anna. “Professor Brian Cox started it and now geeks have become cool over the last 10 years. Also, social media is very, very vilified at the moment — justifiably. But it has allowed people who in a small social group might have been outcasts in the past to bond with each other and realise that there are other nerds out there. Perhaps nerds have become fashionable as the result of a backlash against the way celebrity culture has taken over. A lot of people don’t like that culture.

“Also, in the age of fake news, people don’t know what they can rely on. They like the fact that people are saying ‘These are facts that we have gone to the trouble of researching. We can promise you that they are almost all true.’ It’s not about trash, it’s about real, interesting stuff — it’s an antidote to what is happening.”

James adds: “We did 15 minutes of comedy on William Hazlitt, the 19th century essayist, which I don’t think anyone in history has done before. I can’t imagine any other show would ever do that.”

Whatever the opposite of dumbing down is called, Dan agrees that it seems to be paying off.

“I used to do stand-up gigs where a TV producer would come and tell you afterwards, ‘You mentioned Warren Beatty. He is an old actor name — I don’t think you should mention him in your set. People aren’t going to get it.’

“You are told to make only contemporary references. But we have shown that you can do 15 minutes on a 19th century essayist that no one has heard of. We are charging people to listen to stuff about William Hazlitt!”

It’s an approach that’s proving to have a global reach, with the team set to tour Australia and New Zealand this summer.

“The last 10 years have been all about empowerment,” says Dan. “People in every respect — race and gender — are breaking free. In the same way, for a long time, anyone who read books would be seen as someone who might get bullied for that. I guess we’re part of this new great rise of the underdog. It also helps that we are part of a very successful show. In fact, my number one piece of advice to people starting a podcast would be to be associated with a gigantically popular TV series!”

“We don’t claim to be know-alls,” muses James. “We are simply saying ‘This is what we have found, we think you might find it interesting.’”

For more information, to download podcast episodes, and for a full list of tour dates, visit www.qi.com/podcast