Musical that’s fun from all the family 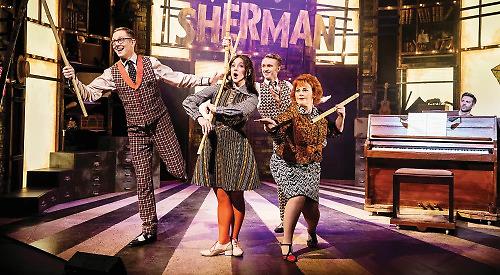 THERE’S a certain timeless quality to the music of the Shermans.

Al Sherman’s Thirties hit Livin’ in the Sunlight, Lovin’ in the Moonlight has subsequently appeared in Spongebob Squarepants, while the Sherman Brothers’ It’s A Small World (After All) seems pertinent and something worth remembering.

With a ludicrous number of hits, including The Wonderful Thing About Tiggers, I Wanna Be Like You, The Aristocats, Supercalifragilisticexpialidocious, Jolly Holiday and Let’s Go Fly a Kite — to name just a few — many of these tunes felt like they could have been written yesterday.

Robert J Sherman has crafted a loving tribute to his father Robert B Sherman and uncle Richard M Sherman (Bob and Dick) and grandparents Al and Rose, decorating the family’s oeuvre with snippets of fascinating information.

From Al teaching himself piano as a child after the upheaval of emigrating to America from Europe, to Bob Sherman joining the Second World War at just 17 and taking a bullet to the knee in the final stages, leading him to walk with a cane, and Al pitching his sons the challenge of writing popular music, their tenacity and drive has paid off.

We were told about the strength of their family unit, with their mantra of “All together, all as one” and how Al’s first royalty cheque (for Save Your Sorrow) arrived just in time for the birth of Robert.

This all clearly inspired the talented cast. In fantastically jazzy outfits, Sophie-Louise Dann, Glen Facey, Jenna Innes, Mark Read and Ben Stock sang their hearts out, while dancing, playing piano and ukulele and occasionally monkeying around.

They all looked like they thoroughly enjoyed being in this production, especially as the melodies were so far-reaching in range and emotion, sweeping us from heartfelt moments and poignant melancholy to the great heights of Mary Poppins, Winnie the Pooh and The Jungle Book.

While I was particularly drawn to the music I remember from my own childhood, the catchy ditties of Al and the equally appealing Love Birds (and the hilarious Crunchy Crackers) from Robert Junior stood tall as well.

The Shermans’ music seems to be exhorting us to remember that life is precious and so, with the odd moment of poignant pause, we should get out there and enjoy it, sing along, dance along and be inspired.

So if you’re in the mood to listen to some musical classics, as this audience certainly was, clapping along, this is the show for you.