Review: The Life of Galileo 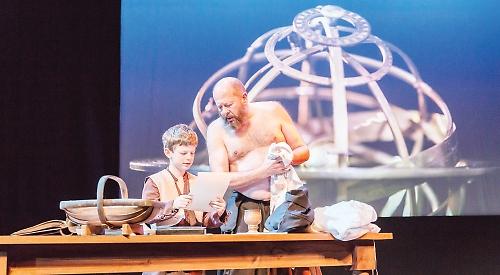 THE Life of Galileo is a big play with big themes and demands big performances — maybe it’s in a bigger league than this normally solid company is used to.

The Oxford Theatre Guild has a proud history and has earned the right through sheer excellence to be judged as a professional outfit; but here, putting it bluntly, they come up short.

The play, about the scientific revolution started by the great mathematician and astronomer Galileo, is long and laboured with little purposeful movement to liven the long speeches and soliloquies.

Some performances stand out: Nick Quartley as the Pope is a treat and a demonstration of how it can be done with vocal restraint, small but meaningful movement and a sense of really inhabiting his character.

The same can be said of Eloise Sheffield, playing Galileo’s daughter, and Edward Smith as the Little Monk follower and advocate; both showed an emotional range and grasp of vocal dynamics.

And, importantly, they knew how to comport themselves on stage with stillness and purpose.

Special mention must be made of Richard Readshaw as the lead, Galileo. He has a massive amount of text to deliver and there is hardly a time when he is offstage; this first night was perhaps a tad shaky on the lines — at times it seemed like he was fighting to keep them going rather than investing them with his character — but it’s a big ask and he handled it with some style.

Too many others fussed and fidgeted, or moved and writhed about for no real reason except to provide an accompaniment to their words.

This is surprising from the OTG, which has many former professionals in its ranks and would normally pride itself on its stagecraft.

The play itself is about confronting the Catholic Church with some uncomfortable truths about where we are in the universe — ie, not at the centre of it.

Galileo’s observations led him to agree with Copernicus that the Earth and other planets orbit the Sun, not the other way round. That wasn’t welcome in a world of blind faith, so this great innovator spoke truth to power — but power trampled all over his truth.

It’s a strong theme but we could have done with it being given to us with a more vitality.