Madagascar ’s cast are ready to ‘Move it, move it!' 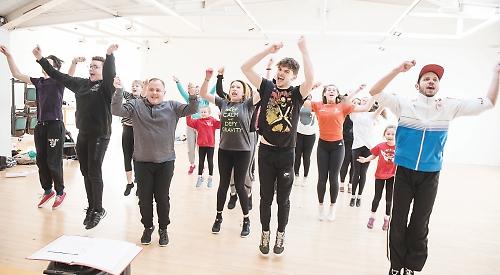 IT’S one of the most successful animated film series of recent years, as popular with parents and grandparents as it is with children — and now it is taking to the stage.

Madagascar: A Musical Adventure is playing at South Hill Park in Bracknell from Wednesday (April 11) to Sunday, April 15, ahead of a national theatre tour later this year.

Alex the lion is the king of the urban jungle — the “mane” attraction at New York’s Central Park Zoo. He and his best friends — Marty the zebra, Melman the giraffe and Gloria the hippo — have spent their whole lives in blissful captivity before an admiring public and with regular meals provided for them.

But one night, not content to leave well enough alone, Marty lets his curiosity get the better of him and makes his escape — with the help of some prodigious penguins — to explore the big wide world.

Director Mark Hooper says: “This Easter, the theatre at South Hill Park will be Wilde by name and wild by nature, as we bring Madagascar: A Musical Adventure to life on stage. If you like the award-winning DreamWorks film as much as we do, we know you are going to love this show. Alex, Marty, Melman, Gloria and of course King Julien himself are ready to take you on an hilarious, action-packed, musical adventure unlike any other — with foot-thumping songs, larger-than-life costumes and a set so gorgeous, you would believe you have fallen through the screen into the film world of Madagascar itself.

“The entire team are so excited to be working on such a fantastic story and we’ve had enormous amounts of fun recreating the characters, comedy and adventure of the much-loved film just for you.”

With original music and lyrics by George Noriega and Joel Someillan and a book by Kevin Del Aguila, the show is being put together by the creatives behind 2017’s acclaimed production of Seussical The Musical.

Filled with outlandish characters, adventure galore and an upbeat score, Madagascar will leave audiences with no choice but to “Move it, move it!”

The show is suitable for ages two years and up, with tickets priced £20.50 for adults with family tickets and group rates available. For more information, show times and to book, call 01344 484123 or visit www.southhillpark.org.uk