Wartime letters are being brought to life 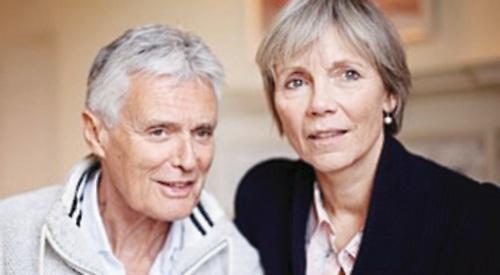 THE wartime letters of the actress Celia Johnson and her husband Peter Fleming will be brought vividly to life at the Mill at Sonning on Wednesday afternoon (April 11).

The couple’s youngest daughter Lucy Fleming will be joined by her husband and fellow actor Simon Williams for the 4pm performance.

The show, entitled Posting Letters to the Moon, has been staged a number of times previously, including at Carnforth railway station in Lancashire, where many of the scenes for David Lean’s classic 1945 film Brief Encounter, in which Celia starred opposite Trevor Howard, were shot.

It has since toured to Nettlebed Village Club and the Kenton Theatre, with audiences being captivated by the show’s romantic, funny and very touching portrait of life in the early Forties.

The show’s title relates Peter’s wartime posting with military intelligence to India and the Far East — “as far away as the moon” as the letters between the couple have it.

Lucy, who plays Miranda in Radio 4 soap The Archers, said she and Simon have had some “lovely reactions” to Posting Letters to the Moon since first performing the show at the Hampstead Theatre Festival in 2016.

“We have had younger people saying they had no idea that living through the war was so difficult.

“Many people mention letters they have at home from parents and grandparents that they are going to look at and discover more about the lives of their relatives.

“People have mentioned the humour in the show and that they have had a bit of a cry too.

“People tend to stay and ask questions about the show, the letters and, of course, The Archers.

“It is so pleasing to us that it is having such a positive response and people are learning more about my mother, apart from the fact that she was in Brief Encounter.

“We do add bits and change it slightly depending on the venue — we are now on Draft 22!”

As with previous performances, the Mill at Sonning show will be followed by a Q&A with Lucy and Simon.

Please note that dinner is not included in the £20 ticket price for this event. To book, call the box office on 0118 969 8000 or visit www.millatsonning.com