Theatre company has ‘Big Data’ in its sights 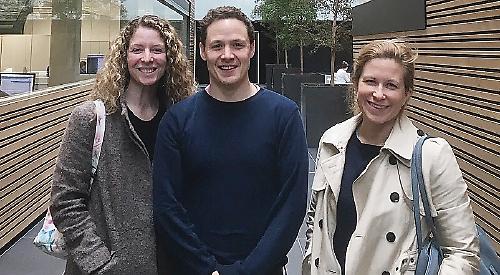 AN award-winning Reading theatre company is preparing to take on the might of “Big Data” later this month when it previews scenes and music from its latest production.

Genomes is the latest play from Beth Flintoff, whose previous work with the Reading Between the Lines theatre company (RBL) has attracted national media coverage.

The Guardian hailed 2016’s Henry I of England as “the next staging post in the mission to give the town a cultural identity”.

Last November’s acclaimed sequel about Henry’s daughter, Matilda the Empress, was included in a round-up of Guardian readers’ 20 favourite theatre events of 2017.

“Everything about the show was exceptional, including the original sound effects, the stage fighting and the choreography,” wrote Angela Benedetti.

Now the same creative team is gearing up to bring audiences what they hope will be one of the defining plays of 2018.

RBL co-founder Toby Davies said: “If you had the chance to know whether your life will be affected by disease, would you take it? What if you could change the colour of your unborn child’s eyes — or rid the world of a disability?

“Our medical records will soon be open to pharmaceutical companies able to tailor their advertising to our individual frailties. So as we enter an age of unprecedented bodily insight and choice, where do we draw the line?

“On Friday, April 20, we’re offering you the chance to join us for the first showings of scenes from our new play, Genomes.

“We’ll have spent the week at the Oxford Playhouse, exploring the first draft of Beth Flintoff’s new play, working with electronic composer Benjamin Hudson on the soundtrack and reconnoitring the concept of the production with director Hal Chambers.

“We’ll then be sharing our work at the South Street Arts Centre and would love you to join us.”

The evening will also feature an audience discussion with genetics expert Dr George Busby and a talk by members of the cast and crew of Genomes, including director Hal Chambers, writer Beth Flintoff, and producers Dani and Toby Davies.

Part of the preparations for Genomes has seen Beth Flintoff go where the action is — Oxford University’s Big Data Institute, where Dr Busby is a research fellow in translational genomics.

He said: “Beth has spent six weeks sitting in our office space. She’s been fully embedded in our research group and with the wider big data science community at the Big Data Institute. She’s been to seminars, spoken with scientists and we chat almost daily about her ideas and the science behind Genomes. She’s picked stuff up amazingly quickly and I’ve really enjoyed her fresh and idiosyncratic take on our work.”

Genomes has been in the making for some time, but the recent controversy over political consultancy Cambridge Analytica’s use of Facebook data can only add to the production’s timeliness.

“We live in a truly digital world,” says Dr Busby. “In 2017, 85 per cent of Britons had smartphones. Most of us are connected, most of the time and the extraordinary developments in digital technologies are fundamentally changing the way our world works. Online, we can find the answer to anything, can buy anything and can communicate immediately with anyone. But, in return for this convenient lifestyle, we implicitly give permission for companies to analyse our data and identify the things that we need, almost before we know we need them. Whilst my data on its own is unremarkable, with many others it has incredible power.

“But it’s not just online retail and advertising where analysis of our data is standard. In medicine ‘a digital revolution in healthcare is coming’ according to the Economist. Projects like the UK Biobank are bringing together thousands of measurements from hundreds of thousands of people.

“In the future, your biological measurements, life history and behaviour will be recorded in apps on your smartphone and health records. This information will be used to help with early diagnostics and treatments. So future healthcare and medicine will be transformed by data. By helping to identify and diagnose disease earlier, healthcare will be more efficient, leading to better patient outcomes. It will also be cheaper. Diseases like cancer will be caught before more expensive, longer term treatments are necessary. This is why, together with the growth of research and skills, genomic big data is at the heart of our medical industry.

“However, data use in healthcare throws up an array of practical, ethical and technological issues that will affect us all. Before we move into this big data-driven future, we need to address the gap in understanding between what scientists and companies say can be done, and what the public believe should be done. Indeed, the chief medical officer’s 2017 annual report specifically highlighted the lack of current public engagement around genomics and medical data innovation. The gap remains wide. So the need for a public debate about this future was a big part of the motivation for developing the play.”

RBL is hosting two previews of Genomes at South Street, Reading, on Friday, April 20 — at 7pm and 9pm respectively. Tickets are priced £6.50 and can be booked by calling 0118 960 6060 or visiting www.readingarts.com/southstreet