Magician in heels will get you looking closely 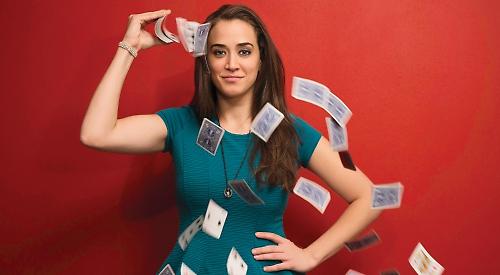 EVER since the age of three Kayla Drescher has loved to perform.

By this time she was taking dance lessons and would jump at the chance to act in small plays at her school.

But it was at the age of seven, when she and her dad found themselves in a magic shop, that she knew what she wanted to do.

Fast-forward to the present and this American close-up illusionist is a winner of David Copperfield’s search for the Next Great Magician and has generated a following for her engaging style and use of everyday objects in her act.

On Sunday (April 15, 6pm) she will be performing at the Hexagon Theatre in Reading alongside four other illusionists as part of their Champions of Magic UK tour, which has already included a run at London’s West End.

The group will be presenting a series of daring and grand illusions, close-up magic and mind-reading. There will also be disappearances, levitation, teleportation and a spectacular finale, all presented with lighting and special effects.

Drescher, who lives in Los Angeles and is known for performing magic in heels, says the show has something for everyone. She said: “Champions of Magic features roughly every type of magic out there: big illusions, close-up, sleight of hand, animals, mind reading and comedy — it’s a blast!

“I’ve never performed in a show quite like this. The production value of the show is top notch. The cast is all so kind and fun. We enjoy joking with each other, especially when Young or Strange slip on stage and we get a video of it.

“Everyone is always working to better themselves, so we’re all sharing ideas and working to continuously make the show even better. I’m excited to get to know everyone even more, learn from each other, and create more wonderful memories!” Drescher was bitten by the magic bug when she was captivated by a shopkeeper who performed a trick for her.

She recalls: “When I was seven, my dad and I somehow ended up in a magic shop. The guy behind the shop counter cut a rope into two pieces and put it back together.

“My brain already worked like a sponge; it needed to know how the world worked. I latched on to magic quickly because I couldn’t explain it, and I had to know how it was done.”

The rope trick was the first she ever performed to an audience and found herself a mentor in Bill Andrews, who was in his 70s.

Drescher said: “He was willing to spend his time and patience helping out a crazy, curly-haired girl who loved to be on stage with her magic props. He was my mentor up until he passed away when I was 19 years old.”

She has now performed across 39 states in America and three continents and her goal is to complete all 50 states and seven continents.

Always learning, she has started a course in comedy and draws inspiration from fellow magicians Mark and Jinger Kalin, Alba, Christian and Katalina, Suzanne, and Gaston Florin and also musicians such as Celine Dion.