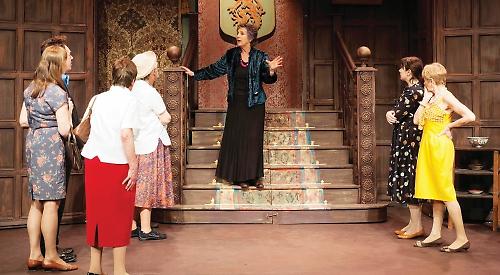 THE Sinodun Players’ production of Peter Shaffer’s Lettice and Lovage, offers an impressive mix of ideas and entertainment.

The comedy revolves around two apparently different women — a tour guide (Lettice) and a preservation official (Lotte) —- who discover more in common than they might have imagined. Initially, Lettice’s theatricality clashes with Lotte’s stern efficiency; ultimately an unlikely but supportive friendship develops.

The light-hearted narrative encourages the audience to think about past and present, culture and personal integrity. What’s the best way to look at life? Is it essential always to stick to the dull truth? Or is it justifiable to tell a few tales to make life more enjoyable?

The role of the maverick Lettice Douffet was written especially for Maggie Smith, a hard act for anyone to follow. However, Erica Harley with her commanding stage presence and well-pitched delivery is superb as Lettice: she is funny, convincing and attractive.

We meet her throwing her energy into engaging indifferent tourists at a stately home. When frustration overwhelms her, she adopts a new approach, inventing stories that are more entertaining than the dry facts.

The contrast between Lettice and her adversary is immediately signalled on stage through costume, Lotte’s plain attire versus Lettice’s flamboyant style.

The two women have opposing outlooks, Lotte valuing only facts and Lettice having time only for what lights up the world. Dour Lotte determines to extinguish vivacious Lettice, but events take an unexpected turn. A quirky relationship grows and the pair share some confidences. However, calamity is lurking just around the corner.

Under the direction of Julie Utley, Harley and Aggett make an excellent pairing. The dynamic between the two provides almost palpable tension and many comic moments. As the foil to Harley’s warm and eccentric Lettice, Aggett plays Lotte as formidably starchy, but also droll and oddly likeable. As Lotte is drawn into Lettice’s extravagant world, Aggett maintains a no-nonsense demeanour, which falters to comic effect when the pair get drunk together on Lettice’s homemade “quaff”.

Strong support comes from Peter Smithson as a pedantic tourist, Gloria Wright as Lotte’s put-upon secretary and Mike Rowbottom, as Bardolph the lawyer, who is in turn laconic, authoritative and bewildered as he tries to get Lettice out of hot water.

An unexpected revelation from Lotte is her hatred of modern buildings. How fitting that a drama focusing on architecture and heritage plays out in a listed venue.

In this play about history and the heritage industry, questions are raised about how individuals position themselves in the modern world. After you have seen it, you will have Lettice’s mantra ringing in your ears: “Enlarge! Enliven! Enlighten!”