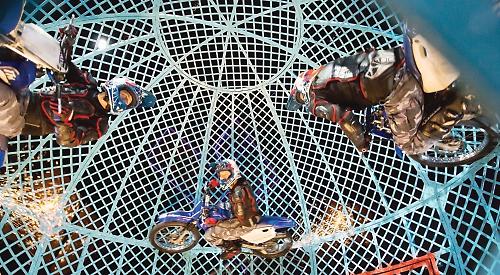 A SHOW advertised as “real circus made for the theatre” was something I had to see.

Now in its fifth year, Cirque Berserk was celebrating 250 years since the invention of the traditional circus — but, what I saw at the Wycombe Swan was far from traditional.

The music was modern and edgy, the lighting full of neons and strobe, the set dominated by a metal sphere with haze and pyrotechnics galore. What made this show really special, though, was just the level of talent.

Opening the show were the Timbuktu Tumblers, an African acrobatic group of seven skilled performers who dived through hoops, jumped ropes and made human pyramids galore.

They worked in such incredible unison and all had a vast array of skills, as well as demonstrating impressive teamwork and trust.

Odka was a favourite of mine, the “lady from the bottle” who literally arrived on stage folded into a bottle before shooting an bow and arrow with her feet!

The humour was brought by the Mustache Brothers, who I had previously seen in action as part of Giffords Circus last year. Their energy, comedy, timing and facial expressions made them very popular with the audience and they injected some lighthearted entertainment within the quite intense performance.

I counted 30 performers in the bows and there was not a weak link. Some of the acts were so truly flawless and the acts so effortlessly performed that I had to remind myself of what I was actually watching. They made it look so easy and that is just a credit to the volume of hours they have all put into training.

Martin “Zippo” Burton, founder and producer, is a circus veteran himself. He came to fame as Zippo the clown and with Cirque Berserk has been able to keep the classic virtues of circus and bring it bang up to date with its staging.

He has certainly gathered an incredible troupe of performers from around the world as well as an impressive creative team with an Olivier Award-winning lighting designer, Mike Robertson, and a creative director, Julius Green, with over 250 shows under his belt to mention just two.

In my opinion, any theatre production that can have two motorbikes flying around the inside of a metal sphere at 60mph with a girl standing in the middle has to be worth seeing. And that was just in the first half! They even topped that in act two but you will have to go and see the show yourself to find out how.