Cast of new Mill at Sonning drama are bedding in nicely! 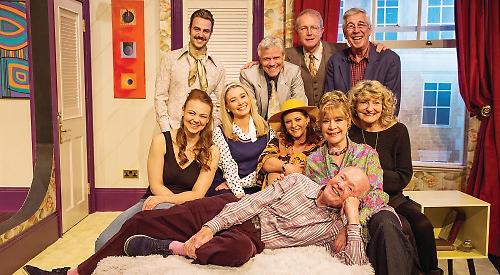 HE’S the acknowledged master of farce whose uproarious comedies have proved hugely popular with Mill at Sonning audiences over the years.

Now playwright Ray Cooney is back at the Sonning Eye venue in person to direct one of his most riotous — and frankly libidinous — dramas.

Co-written with the late John Chapman and first performed at the Richmond Theatre in July 1969, Move Over Mrs Markham tells the story of three couples and one apartment — all seemingly with just one thing on their minds!

A spokesman for the Mill at Sonning said: “This wonderful farce is set in an elegant, recently renovated London flat belonging to the happily married Philip and Joanna Markham.

“Philip, a strait-laced publisher of children’s books, has reluctantly agreed to let his partner Henry Lodge borrow the apartment for an evening to entertain a new girlfriend.

“At the same time, Joanna Markham has allowed Linda Lodge to borrow the apartment so she can rendezvous with her lover. What nobody knows is that the interior designer has also decided that this is the night he wants to try out the new oval bed — with the au pair girl!

“When the Markhams’ evening out is cancelled it’s too late to let any of the parties know and three sets of hopeful lovers converge on the bedroom at the same time. The situation is further complicated by the arrival of Olive Harriet Smythe, a dour but successful authoress.

“The frantic efforts of the Markhams to hide the amorous goings-on and, at the same time, sign up Miss Smythe, lead to a hectic and hilarious evening where, as in all farces, chaos and confusion reign. Don’t miss this saucy, sparkling and riotously funny treat. You won’t stop laughing!”

Move Over Mrs Markham began its six-week run at the Mill last night (Thursday), with the last performance scheduled for Saturday, June 2.

Evening shows run from Tuesday to Saturday and Saturday matinées will take place every week, with Sunday matinées currently booking for April 29, May 13 and May 20.

• See next week’s Henley Standard for an interview with Ray Cooney.