Star of the show holds the whole production together 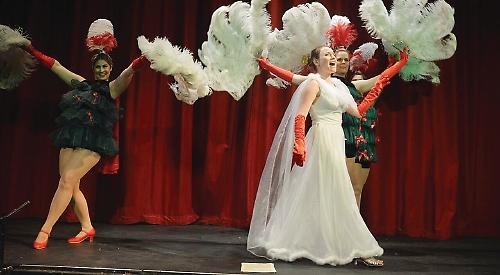 GYPSY, the 1959 musical with music by Julie Styne and lyrics by Stephen Sondheim, has been described as many things, all full of praise — the greatest ever American musical, Broadway’s answer to King Lear.

Maybe. It certainly follows the dreams of an ambitious parent. Like all parents, Rose is finally forced to ask herself whether her ambition was for her daughters or for herself, living her own dreams through them.

Gypsy is loosely based on the life story of Gypsy Rose Lee — no, not she of the tea leaves but the famous striptease artiste.

In this production by the Henley Amateur Operatic and Dramatic Society (HAODS), the more than able cast is directed by the dedicated Phil Couch with amazing choreography by Emma Broadway.

Note the tap dancing sequence by Peter L Phoenix — what a star turn that is! The music, in the capable hands of musical director Jonathan Heard, comes from the orchestra pit into which the musicians and their instruments bravely squash.

The greatest plaudit must go to Caroline Hopkins as the ambitious and very complex mother, Rose. She is an amazing actress with a versatile voice. Her singing expresses love, loss, rage and more.

Follow her story to the very end of Gypsy and you will come away asking yourself many questions about her motives, her inner being and so on. Caroline Hopkins held the whole production together.

There are many other smaller roles deserving a mention: it is always a joy to hear Katie Healy sing and, at the end, she manages a very sensitive portrayal of a successful daughter supporting her mother as she deals with her dreams.

The three burlesque strippers/dancers — Sam Riley, Victoria King, and Karen du Plessis — are wonderfully decorative and cheeky. And don’t panic, Henley, it is all done in the very best taste, so no need for your sunglasses.

There are several songs you will know so well: Everything’s Coming up Roses, Together (Wherever We Go), Let Me Entertain You and plenty more.

Their Stars and Stripes Uncle Sam routine was full of verve and energy, as was everything in this production. The exciting lighting effects also did much to enhance that scene. Another excellent routine is the train journey — speedy, colourful and clever.

How fortunate Henley is to have the Kenton Theatre where such international gems of theatre may be staged and to have such a vast and willing pool of talent, happy to give their time and energies to provide us with top notch live theatre experiences such as Gypsy. This is certainly one very energetic, colourful production.