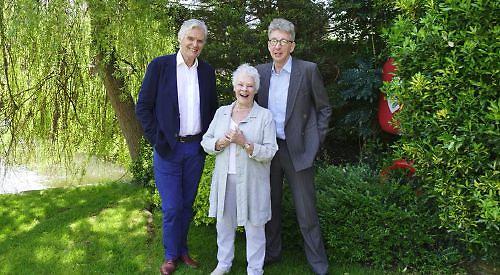 SHE’S known to her millions of fans as M in the James Bond films, but Dame Judi Dench has revealed that her first ever role was portraying a snail.

The actress revealed her humble beginnings on stage at school when she gave a charity performance at The Mill at Sonning theatre on Sunday afternoon.

She also sang Send In The Clowns from the 1973 musical A Little Night Music and received a standing ovation from the sell-out audience.

Dame Judi, 83, a multi-award winning actress, was in conversation with fellow actor Simon Williams, from Bix, who asked her about her life, loves and experiences in theatre and film.

The event raised £20,000 towards the refurbishment of Eye and Dunsden village hall from sales of the 217 tickets and a raffle.

It came about after David Woodward, acting chairman of the village hall charity, told the Mill’s managing director Sally Hughes about how they were struggling to raise enough money for the project.

Mrs Hughes agreed to help and was overheard by Dame Judi’s actress daughter Finty Williams, who said: “Shall I ask my ma if she would do something?”

Finty, who is currently starring in Move Over, Mrs Markham at the theatre, joined her mother on stage for her performance of Send in the Clowns, accompanied by Toby Cruze on the piano.

Mr Woodward said: “She and Simon were wonderfully relaxed together and they had the audience in stitches. She sang Send In The Clowns and there were tears in the eyes, there really were.

“She said, ‘I met Matt LeBlanc as well and he kissed me more than twice. He asked me if I would like to appear on Top Gear’ but she said her eyesight wasn’t as good as it was.

“She demonstrated her absolute sharpness of wit and professionalism because she was put on the spot by Simon who asked her to recall some speeches from Shakespeare that she had made previously and one of them was from her first role as Ophelia [in Hamlet].

“To start with she didn’t want to be an actress, she wanted to be a costume designer. She talked about her first acting role, which was when she was cast as a snail in a school play. It was quite funny to imagine her as a young child.

“She also spoke about how she’s a Quaker and how she finds a kind of inner calm from that.

“We presented her with a willow tree to thank her for the huge favour of performing for us and she kissed it and told us the story about how passionate she is about even the felling of a branch.

“Credit should be given to Simon as well because he MC’d the thing perfectly.”

Mrs Hughes said: “It was an extraordinary and unique moment in theatre.

“Simon Williams was the consummate host and Dame Judi was the star that she is, proven by the fact that at the end of her rendition of Send In The Clowns the audience rose in unison. It was an amazing moment.

“The Mill is honoured to have had Dame Judi Dench appear and I am so delighted that we were able to raise the £20,000 that the village needed."

Mr Woodward said the money raised was a “massive” contribution towards the £400,000 project.

He said: “What it will actually do, I hope, is pay for some of the finishing touches. In a building connected with the arts because Wilfred Owen was there, we’re hoping to have a community cinema and it would be lovely if the money paid for that.”

The main hall has been extended by about 40 per cent and underfloor heating installed along with a new foyer, kitchen and toilets. It will be officially unveiled next Saturday.