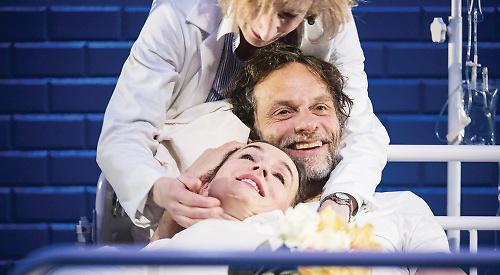 THIS really shouldn’t have worked — it’s set in a uniformly cold blue hospital room, it’s one of the bard’s more aimless plays and, biggest challenge of all, it’s in French.

But this is Cheek by Jowl on a mini-tour and they never fail to deliver — and they do here.

How do they get away with what looks like a piece of East German hairshirt theatre pre-1989? Sheer talent! The acting in this weird Mediterranean travelogue is superb, no matter the language.

Yes, sometimes it’s confusing, but when did Shakespeare’s plots ever matter anyway? We roll from Macedonia to Tarsus to Ephesus while all the while we’re confined to a utilitarian hospital room and a comatose Périclès appearing to act out his dreamworld tragedy of a life.

The story weaves around all over the Med and goes to places Shakespeare likes to visit — like a long scene in a brothel as one of his heroines defends her virginity; he was no stranger to houses of ill repute.

He also had a penchant for stormy seas, disasters therein and wives and daughters washing up on far-flung shores. So we’re at home anyway.

The narrative is played out in modern dress with a constant soundtrack of modern jazz in the background. But it’s the acting which transcends everything: Christophe Grégoire, Camille Cayol and Valentine Catzéflis excel and if the French isn’t always accessible then the original text English surtitles are there to help.

Why French? Oxford is the only venue beyond the Barbican that this is playing and London, as we’ve come to learn, is now the sixth largest French city. That might be one reason.

Another might be that, played as this was the day after St George’s Day and the Bard’s birthday, it was to show some European unity and to demonstrate that our shared cultures won’t be riven by Brexit.

Either that or to deliberately wind up the dodgy end of UKIP.