Decision to keep 1970 setting is good for the goose 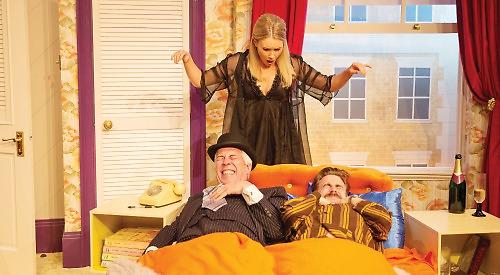 THE promise and sometimes the threat of sex is everywhere in Philip Markham’s flat as a couple of bits of naughtiness develop into a rampaging series of lies.

Philip’s business partner Henry Lodge is out to cheat on his wife, Linda, and Linda is about to do the same to him for a bit of variety.

The snag is they both want to do it in the Markhams’ flat at the same time but without the other knowing.

The makings of classic farce from a classic farceur — and the Mill makes doubly sure of getting it right by inviting the playwright, Ray Cooney, to direct.

He knows his own play and perhaps recognises that its setting in 1970 should not be brought up to date. As it stands it’s a period piece, a bit of exaggerated social history, so we can laugh at the attitudes to goosing — tolerated and even enjoyed in this play — and the depiction of gay men. That was how things were.

The set design and costumes are true to 1970 — certainly as this reviewer remembers it — and so are the attitudes which exploit hypocrisy to the full.

There are nine characters in this play and all of them are at some stage assigned another identity to get out of an ever more convoluted plot. See Henry Lodge squirm as he lies his way out of meeting his very young potential mistress, see his wife Linda do the same as she arranges an assignation with an elderly gentleman — Andrew Hall, Judy Buxton and Jeffrey Holland work their socks off in these roles.

Inevitably there are states of undress with negligees and underwear abounding as they try to climb out of the deepening pit they continue to dig.

But not for the first time at the Mill in recent years, Finty Williams steals the show. Her mum, Dame Judi Dench, was in the audience to see her on the first night, and she will have loved this performance.

Ms Williams has a way of delivering a line in this type of farce which cuts through everything else; she somehow makes it more than it is with a nervous laugh or an exasperated gasp. Basically she has funny bones and, again not for the first time, it’s worth the admission just to see her.

Move Over Mrs Markham is played played a breakneck speed — a Mill trademark for farce — and is all the better for it.

And you can assume, as with all farces, that a moral message must result even as the play drives cart and horses through the marriage vows. So people do wind up in bed together — but perhaps the ones who should do ... by 1970 standards, that is.