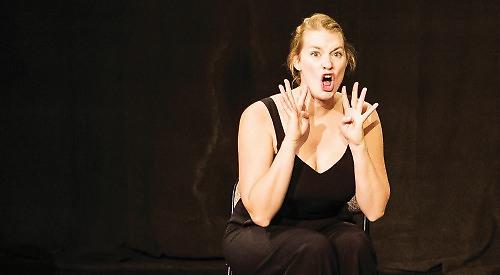 TWENTY years ago, four single ladies emerged on to our television screens in search of love and cosmopolitans.

From naked dresses, tantric sex demonstrations, and Post-it notes, Sex and the City catapulted to raunchy glory and won a place in the hearts of millions of viewers around the world.

Lines like “He’s just not that into you” soon found their way into the wider world, subsequently inspiring a self-help book and a film of the same name.

But with plans for a third film permanently on ice due to the frosty relationship between co-stars Sarah Jessica Parker and Kim Cattrall, it seemed the adventures of Carrie, Samantha, Charlotte and Miranda had reached the end of the road.

One Woman Sex and the City is the brainchild of actress Kerry Ipema and writer-director TJ Dawe, whose previous creations include One Man Star Wars Trilogy and One Man Lord of the Rings.

Billed as “a parody of love, friendship and shoes” the show promises to bring your favourite SATC characters to life as they brunch, banter, argue, support each other and swoon over assorted men and Manolos. Kerry says: “I hope people can expect to laugh, and have a good time. I hope to create an environment that’s very similar to the girls’ brunches.

“Whether you’re a Carrie, Charlotte, Miranda or a Samantha, there’s something here for you.”

As a one-woman show, the current Twitter-fuelled froideur between SJP and Kim C is guaranteed not to be an issue. “The beauty of our show is we are approaching Sex and the City from today’s vantage point,” says Kerry.

“We have the privilege of looking back on this show that still connects us all and laugh at how much has changed and how far we’ve come. To speak freely, Sex and the City had multiple references and even a cameo from the current President of the United States, so to not address that as a parody writer just doesn’t make sense.

“From the feud between SJP and Kim Cattrall to Cynthia Nixon’s recent announcement that she is running for Governor of New York State, it’s all fair game!

“The most important part of the show is the community we create with the audience. I want every show to feel like it’s you and your girlfriends getting together and laughing and sharing stories of dating past, present, and future.”

One Woman Sex and the City is touring to the Wycombe Swan on Wednesday (May 2) and South Hill Park in Bracknell on Friday (May 4).

For more information and to book tickets, visit www.onewomansatc.com