Railway ghost story was a delicious wait for Dickens’s twist! 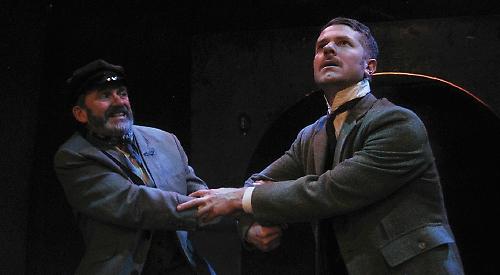 DEMONSTRATING the effectiveness of simplicity and the power of darkness, Rumpus Theatre Company and the Pomegranate Theatre Chesterfield brought a chill wind to Windsor in this spooky rendition of a Dickensian ghost story.

Largely a two-hander, John Goodrum (as signalman Joseph Standcot) and Chris Sheridan (as Richard Brightwell) were very convincing as we heard a fraught tale of woe in a lonely, isolated signal box, punctuated with bells, tapping and the occasional train coming through.

Goodrum and Sheridan maintained their performances, each emoting and delivering a substantial amount of dialogue without wavering.

The recreation of each train was a marvel, carried out with lights, smoke and sounds to great effect.

The blackness of the railway tunnel in the background, the sparse setting and the bygone ways of life from Dickens’s era made for a sombre mood.

In this atmosphere, as it became apparent that Standcot was reliving traumatic events from the past and suffering a tremendous amount of guilt, and as the layers built up, we kept wondering what the twist would be.

In a nicely paced piece, there was just the right amount of suspense to keep you guessing until the finale.