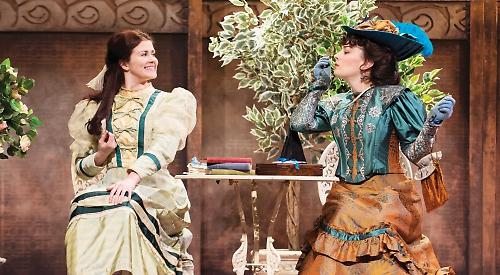 THE Original Theatre Company are bringing turn of the century style and a degree of decadence with them as they present Oscar Wilde’s The Importance of Being Earnest at Windsor’s Theatre Royal, writes Peter Anderson.

The show runs from Monday, April 30, to Saturday, May 5, and stars the imperious Gwen Taylor (Coronation Street, Duty Free, Barbara) as the formidable Lady Bracknell, with Susan Penhaligon (Upstairs Downstairs, Bergerac) as the hapless Miss Prism.

Most people are aware of Wilde’s infamous detention in Reading Gaol, but he also had more pleasurable stays in the area, including spending some time at Ferry Cottage in Goring while writing An Ideal Husband.

The Importance of Being Earnest was written during a holiday in Worthing, where he was joined for a time by Lord Alfred Douglas.

It is suggested that Alfred could easily have been the inspiration for Algernon, and in his own memoirs he also hints that some of the best lines may be from him as well.

And it is surely interesting to note that Douglas’s mother Lady Queensberry lived in Bracknell — down the road from where this production played at South Hill Park in May last year.

Though, as I discovered when I chatted with Alastair Whatley, artistic director of the Original Theatre Company, the Lady Bracknell of the play is in her mid-forties.

It was the iconic Dame Edith Evans performance, that embedded the idea of her being a more mature lady in the public mind.

I asked Alastair what his thinking was behind his interpretation of the story. He said that for him it was essential to return to what Wilde had written rather than be influenced by later adaptations.

Looking again at the play, it was clear that one of the major themes Wilde wanted to exploit was the glaring difference between the older characters and servants who very much represented the staid Victorian standards towards the end of the Queen’s reign when she was older and also in mourning for her beloved Prince Albert.

They are comedically counterpointed with the two younger male characters who more reflect the Prince of Wales with a more colourful laidback existence and rooms more sparsely furnished and décor beginning to reflect the Art Deco period.

When The Importance of Being Earnest opened at London’s St James’s Theatre in 1895, Wilde already had the An Ideal Husband running for some time he was very much the talk of the town.

As Alastair says: “Four months later, Wilde would be in Reading Gaol. This play would be his best, but also his last, written at the zenith of his fame with lurking shadows hidden deep within the soufflé of wit, manners and Bunburying. It was literal escapism and it helped create a mighty precipice from which to fall. With Brexit meaning Brexit and Donald Trump in the White House in Washington, I feel we are all in a need of a reminder of The Importance of being Earnest.”

Tickets for the Theatre Royal, Windsor, run start at £16. To take a welcome turn with Wilde’s much-loved Algernon, Jack, Gwendolen and Cecily, as town and country clash in a brilliant and wildly funny story of romance, mistaken identity, perambulators and capacious handbags, visit www.theatreroyalwindsor.co.uk

Natalie Aldred’s review of the South Hill Park run can be found at www.henleystandard.co.uk/news/community-news--all-districts-/110141/we-re-still-wilde-about-oscar-s-most-quoted-play.html