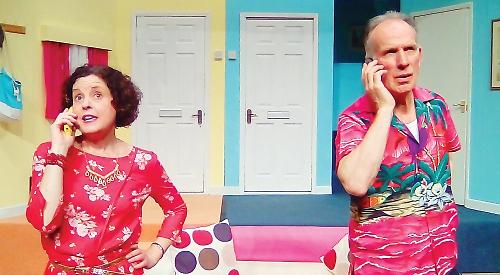 In an about-turn from the week’s earlier performances of dark and eerie ghost story The Signalman, here Rumpus Theatre Company livens things up and sets a firecracker under the seats with its action-packed farce.

A sequel to his infamous play Run for Your Wife, writer Ray Cooney has stuffed this comedy to the rafters with slapstick silliness, uncomfortable half-truths and tall tales that become more incredible with each passing moment.

Long-suffering lodger Stanley Gardner is clearly used to filling in the gaps and covering for John, who is simultaneously married to Barbara in Streatham and Mary in Wimbledon.

As Gavin and Vicki arrange to meet up, it’s fair to say that Stanley’s planned trip to Felixstowe with his eccentric father is going to be delayed.

With the stage giving us a split-screen set-up of the two houses in Streatham and Wimbledon, the cast never wavered as to which they were in, which was quite an achievement given there were seven doors and one set of back stairs.

And special mention must be given to Stanley’s loud and vibrant Hawaiian shirt, ironically offset by his desire to perhaps shrink invisibly and silently into the background.

Everyone involved brought an immense amount of energy to this production, which proceeded to get more and more bonkers, as Gavin and Vicki were sent alternately to Poppy’s tearooms (but definitely not Luigi’s greasy spoon), Barbara was the recipient of many confusing phone calls and Mary resorted to threatening Stanley with a table knife.

Mistaken identities led to made-up mad aunties, pretend corpses and tumbles down stairs. But none of the cast missed a beat when it came to depicting who thought who was who, and as things descended into chaos, towels, shower caps and snorkels added to the entertainment value.

Many of the elements of farce seem to require not just a suspension of disbelief but also a suspension of comfort. You cringe and mentally hold your breath and sometimes want to shake some common sense into the characters — exasperating and exhausting as their antics can be.

So it was pleasing that the ending seemed to wrap things up in a most satisfactory manner, my only concern being that poor old pensioner waiting to be picked up outside Tesco.