Stoppard production is labour of love for top theatre director 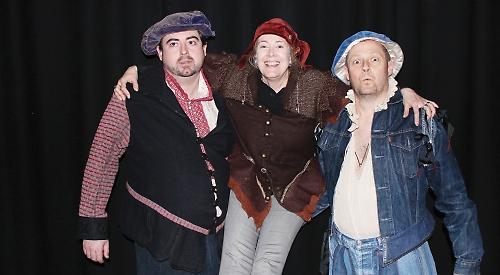 A TOP professional theatre director will be at the helm of the Sinodun Players’ forthcoming production of Tom Stoppard’s Rosencrantz and Guildenstern Are Dead at the Corn Exchange, Wallingford, later this month, writes Carol Evans.

As a director, Ms Pitman-Wallace, who lives in Brightwell-cum-Sotwell, has worked extensively with top theatre companies in the UK and abroad.

This will be the first time she has worked with the Wallingford drama group and she is looking forward to the experience.

She says: “I have known about the Sinodun Players and the Corn Exchange theatre since I moved to the Wallingford area. Their reputation as an excellent amateur group fuelled my desire to work with them in their beautiful refurbished theatre. I am enjoying working with this professionally-run group.”

Ms Pitman-Wallace will be bringing a wealth of experience to the Corn Exchange. In an impressive career spanning more than 20 years she has directed highly regarded professional productions at venues all over Britain and abroad, picking up numerous “best director” awards in the process.

First performed on the Edinburgh fringe in 1966, Stoppard’s play focuses on the misadventures and offstage musings of Shakespeare’s Rosencrantz and Guildenstern.

Using Stoppard’s witty and droll dialogue, the duo voice their confusion about their roles in the story of Hamlet which, from their perspective, are largely nonsensical and comical.

On being revived by the National Theatre, then based at the Old Vic, the following year, the play made the reputation of its young author.

Rosencrantz and Guildenstern Are Dead explores a world where nothing makes sense for its protagonists. Ms Pitman-Wallace says: “I see it as a philosophical musing on the nature of being whilst remaining a comedy. Ever since I assisted on a production at the National I have wanted to do my own version.”

Producer Gloria Wright is very enthusiastic about the production and working with a professional director.

She says: “It was 40 years ago that we opened the Corn Exchange as a theatre and since then we have worked hard to build the reputation of the Sinodun Players as a centre for excellence in South Oxfordshire. Working with Lucy is giving us the opportunity to gain valuable insights into the world of professional theatre and push ourselves to the next level.”

Rosencrantz and Guildenstern Are Dead is playing at the Corn Exchange from Wednesday, May 23, to Saturday, May 26, at 7.45pm nightly.

Some tickets should also be available on the door.