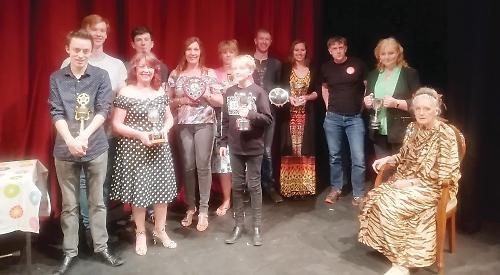 THE winners of this year’s Henley Drama Festival have been announced following Saturday’s gala evening at the Kenton Theatre.

The festival, which started last Wednesday, saw eight drama groups competing for awards in three classes — “open”, “all women/men” and “youth” — with a number of special awards also up for grabs.

The open class was won by the Oxford Theatre Guild with their production of Queers — a series of three monologues by different writers — which saw them presented with the Kenton Drama Award.

The runners-up, who received the Weatherhead Award, were the Didcot Phoenix Drama Group, with their staging of A Bench at the Edge by Luigi Jannuzzi.

The same production also scooped the Charlotte Thomas Award for the all women/men class.

In the youth class, the Reg Judd Award went to the appropriately named Young Theatre company from Beaconsfield for David Wood’s stage adaptation of James and the Giant Peach.

Last year’s festival had seen a “home win” for the Henley Amateur Operatic and Dramatic Society, who took home the Kenton Drama Award.

They had hoped to repeat the feat but technical glitches saw the group’s stirring production of Effie’s Burning by Valerie Windsor just miss out.

However, they did not go home empty-handed, with Julie Huntington winning the Hannen Award for best actress for her performance in the title role.

She and co-star Sam Riley also scooped the Diamond Shield Award for “magic moment” — the final hug between Effie and Dr Ruth Kovacs at the end of the play.

Julie said: “We were delighted to get best actress and memorable moment. We had a bit of a lighting malfunction at the start of our play, which lost us a few points — we were just three off the winner. First place was 85 points, the runners-up had 83 and we had 82, so just pipped!

“The adjudicator Colin Dolley is a particularly knowledgeable man and always gives a thorough, intelligent and very constructive critique.

“We have taken one of his suggestions on board going forward and of course sorted the lighting out!

“We are competing in the Oxfordshire Drama Network Festival on June 6, so we are hoping for good things there, too.”

Meanwhile, the Henley Standard Award for best actor went to Peter Sheward-Himpson of the Oxford Theatre Guild for his performance in Queers.

The Peggie Wilcock Award for best supporting role went to Daisy Norton of the Didcot Phoenix Drama Group for her portrayal of Young Primrose in Primrose Way by Ron Nicol — the group’s second entry.

The Daphne Marshall Award for best performance in the youth class went to Danny Mohideen of the North Oxford Youth Theatre Group for his performance as William in Chatroom by Enda Walsh.

And the Joanna Jones Award for best supporting actor in the youth class went to Talon Baker for his Duncan in Macbeth.