Show’s tribute to co-stars who carried on regardless 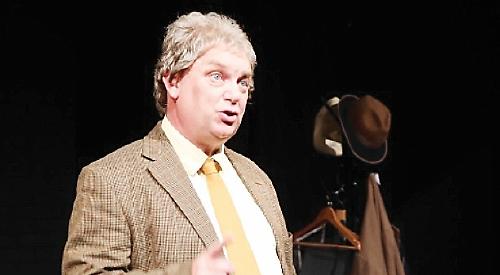 THEY were two of the biggest stars of their day and the films they made together became an evergreen part of the postwar comedy landscape — as British as fish and chips and warm beer.

Now a new theatre production celebrating the lives of “Carry On” regulars Sid James and Joan Sims — and the 60th anniversary of the films themselves — is coming to the HAODS Studio next door to the Kenton Theatre in New Street tomorrow night (Saturday).

Funny Faces is the work of Northampton-based Next Page Productions and features two dramatic monologues written by the actor and playwright Steve Dimmer.

The first, SIMply Joan, stars theatre company founder Caroline Nash as the First Lady of Carry On and tells the relatively unknown story of this iconic British actress, who died in 2001 aged 71.

Join Joan as she takes a walk down memory lane and reflects on her professional work and her private heartache — sometimes hilariously, often touchingly — as we witness her determination to “Carry On!”.

The second, Wot Sid Did, stars playwright Steve Dimmer. We join Sid in his dressing room in the hour before his last ever performance. Sid’s in a pensive mood as he takes stock of his life, particularly his relationship with his lost love, Barbara Windsor.

The play is set in the Sunderland Empire Theatre, where on April 26, 1976, James suffered a heart attack while performing on stage, dying in hospital an hour later. He was 62.

Some performers, including the comedian Les Dawson, later claimed to have seen the ghost of James at the theatre and refused to appear at the venue again.

One of the best-known faces of the series that started life with the release of Carry On Sergeant in 1958, James first appeared in 1960’s Carry On Constable. He subsequently starred in a further 18 Carry On films, receiving top billing in 17 of them.

However, he was outstripped on appearances by Joan Sims, who starred in 24 of the 30 films made between 1958 and 1978 — having by coincidence appeared in a 1957 film called Carry On Admiral that predated and was not part of the Carry On series.

A one-off revival — Carry On Columbus, the 31st film in the series — appeared in 1992, but Sims chose not to return.

Looking ahead to tomorrow night’s performance, which is the last in the tour, Caroline Nash said: “This fabulous piece of new writing is performed as two one-hander plays, based on the lives of Sid James and Joan Sims and was developed to celebrate the 60th anniversary of the first ever Carry On films appearing on our screens.

“As well as that, the week that we visit Henley, it would have been the birthdays of Sid James and Joan Sims, so we will be celebrating with the audience with a glass of bubbles.”

Like Caroline, playwright Steve Dimmer is also Northampton-based — but their current collaboration marks the first time they have worked together in almost 30 years.

An acclaimed magician and children’s entertainer, he has won awards for his close-up, children’s and cabaret magic and has performed all over the British Isles.

Meanwhile, his work as a dramatist has seen him write more than 10 full-length theatrical works and over 20 theatrical pieces for children.

For her part, Caroline has produced four previous tours and has acted for both theatre and television, having trained at the Birmingham School of Speech and Drama. She recently appeared in BBC Two’s My Country — A Work in Progress, directed by the National Theatre’s artistic director, Rufus Norris.

Funny Faces is directed by Rosemary Hill, artistic director at the Milton Keynes-based The Play’s The Thing theatre company.

One reviewer called the show “an original and interesting production that gives a glimpse into the real lives behind those funny faces ... enthralling from the first line until the last” while another called the performances of the two leads “charismatic and convincing” and “outstanding”.

• Tickets for tomorrow night’s performance are £12 with concessions £10 and a group booking rate of £90 for 10 tickets available. Doors open at 7pm and showtime is 7.30pm. For more information and to book, visit www.nextpageproductions.co.uk or www.ticketsource.co.uk