Stand-up return is just the job for all-rounder 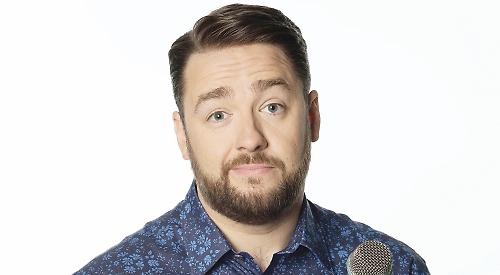 QUITE a few showbiz folk are described as all-round entertainers — but Jason Manford really fits the bill.

The 36-year-old is equally at home as a TV and radio presenter, singer, actor and star of stage musicals including Sweeney Todd and The Producers.

He even trod the boards as Caractacus Potts in the 2016-17 UK tour of Chitty Chitty Bang Bang alongside Phill Jupitus, Michelle Collins, Martin Kemp, Carrie Hope Fletcher and Claire Sweeney.

Many TV viewers will remember his stint presenting The One Show on BBC One alongside Christine Bleakley. This followed three years as a team captain on Channel 4 panel show 8 Out of 10 Cats.

Comedy, of course, being what Salford-born Manford is best known for. Despite his sprawling CV, it remains his bread and butter — as witnessed by the scale of the almost year-long stand-up tour he is currently embarked on.

“Muddle Class” will take Manford to the Hexagon in Reading next Wednesday (May 23) followed by the Wycombe Swan on Wednesday, November 21. It is the comedian’s first nationwide tour in some years and he couldn’t be more delighted about it.

“Out of everything I do, stand-up is the job I love most,” he says. “It’s great to be returning to the freedom of being in charge of what I say and do. It’s just lovely to be back!

“I’ve been doing stand-up for 20 years now and during a gig last night loads of stuff was happening that had never happened to me before.

“I was talking about women’s football, and a woman in the audience jumped to the conclusion that I was slagging it off, whereas I was actually praising it.

“She got argumentative, but I let her have a say. Then I turned to the audience and said ‘She is saying exactly the same as me!’ I was a victim of sexism!”

He adds: “Things will happen tonight that won’t happen tomorrow and didn’t happen yesterday. Every night is unique — that’s the magic of live. I just love it!”

Manford clearly adores touring the country and getting to know different places. Which is probably just as well given that the “Muddle Class” tour started at the end of February and is currently booking until just before Christmas.

“I get stir-crazy if I stay in one place too long,” he laughs. “My whole adult life has been spent touring and I love it. I couldn’t do a nine-to-five job. That would hurt my head!”

As the name suggests, “Muddle Class” is an hilarious exploration of Jason’s confusion about his current social status.

“It came from watching other unnamed comedians chatting about being in the queue at Sports Direct. I was saying to myself, ‘You don’t shop at Sports Direct!’ So I started thinking, what happens if you have some success as a comedian? Do you have to stop doing stand-up because you are different from other people? Of course you don’t. What doesn’t change is your relationship with your family and friends. There’s still a huge amount of comedy in that.”

As he started to develop this idea in warm-up shows, Jason discovered that it struck a real chord with audiences. “A lot of people count themselves as ‘Muddle Class’. They find themselves in a place where they think, ‘I don’t know where I belong any more’. The show is about being in that sort of social muddle. Most class comedy is about people aiming upwards and trying to get out of the working class. Look at Hyacinth Bucket. But I’m aiming the other way. I’m trying to be perceived as working class, even though my life is now very much middle class!”

Maybe so, but that doesn’t mean everything always goes swimmingly for Manford. “Muddle Class” sees him admitting to wanting to lose weight after getting stuck in a slide at a water park.

“Weight-loss is something you don’t hear men talking about very often,” he says. “We feel self-conscious about it. So it’s nice to hear a bloke discussing it.

“The subject transcends gender. Women come up to me after the show and say ‘I felt like that as well’. I think that section works so well because it comes from a real place. It’s part of me being very honest on stage.”

The show is also distinguished by Manford’s mastery of physical and character-driven comedy.

Manford’s stand-up also stands out because it is not trying to score political points. “I just want people to have a laugh,” he says. “I do like comedy with a message — I like satire and clever comedy. But no one goes away from my stand-up show thinking, ‘I had a really good think there!’”

It’s safe to say that Manford is looking to forge an emotional rather than an intellectual connection with his audience.

“People do seem to connect with me,” he says. “I know the effort and expense people go to in order to be at my show. It’s about having respect for that — I know how much it costs to pay for tickets, taxis, food and babysitters.

“Even if you are a huge comedy fan, you might only go to two or three gigs a year. I realise it’s a very big deal that they have come to see me. I know how rare it is for couple to be able to have a night out. So the fact that they want to spend it with me is a real honour.

“As a consequence, I want to ensure they have the best possible night and have a really fun time with me for a couple of hours.”

His eyes twinkling, Manford adds: “A lot goes into making ‘Muddle Class’ what I hope is a terrific show. The audience make an effort to be there, I put in the same effort, and together we create a great show. The audience is as important to the show as I am — it would be equally rubbish if either of us wasn’t there!”

• For more information, including a full list of tour dates, visit www.jasonmanford.com/live