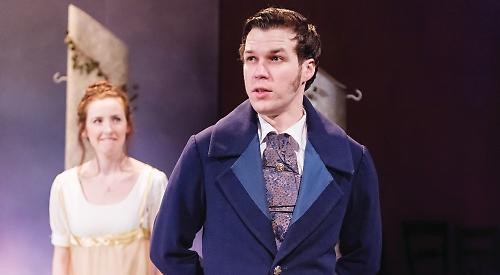 THE sounds of the seaside filled the opening moments of this play — a moving accompaniment to illustrate how the protagonist, Anne Elliot, has cast herself adrift.

In a sea of blue, on a stage where the musical instruments have been cannily built into the granite-like fixtures and fittings, we hear of Anne’s plight, and her lament for a lost opportunity for love.

Having been persuaded to turn down Frederick Wentworth eight years before, as he does not match her family’s aspirations, circumstances bring him back on her radar.

A creative and multifaceted cast brought us a smorgasbord of characters, while synching up to play the violin, flute, piano and clarinet as appropriate.

Ceri-Lyn Cissone captured the essence of Austen, in her portrayal of a young woman “in second bloom” who, while living with her own regrets, has an impeccable moral compass amid the chattering classes.

Matthew Atkins, Siobhán Gerrard, Indigo Griffiths and Lucinda Turner all excelled in their turns as Anne’s family, friends and acquaintances, from her haughty and disdainful father and older sister to her ditsy younger sister; an earnest Mrs Smith; giggly sisters Henrietta and Louisa; and many others.

Alongside the cleverly placed instruments, there were parasols which took on multiple uses as the wheels for a horse and cart and the waves of the sea. Even the furniture took various tumbles as a maelstrom of emotions was played out on stage. As the nature of Jane Austen’s tales requires a certain amount of exposition and wordiness, this was a nice way of illustrating the story.

Theatre6’s artistic director Kate McGregor, adapter Stephanie Dale and music composer Maria Haïk Escudero have carefully crafted a paean to a timeless author of 200 years ago and, as with all Austen tales, building the suspense right up until the happy ending.