Actors’ own contributions are a welcome ‘sign’ of the times 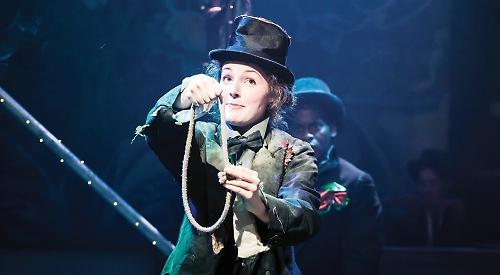 A Midsummer Night’s Dream | The Watermill, Bagnor | Tuesday, May 29

CHROMATIC chaos in the opening music from an amazing cast of actor-musicians tells you that the Watermill’s production of A Midsummer Night’s Dream is going to be something fresh and a bit “outside the box”.

Most people are familiar with Shakespeare’s fairytale, set in a wood by moonlight and festooned through the Bard’s imagination with star-crossed lovers, magic, and theatre in the form of the play within a play, Pyramus and Thisbe.

But here director Paul Hart has put his own layer of imagination on top of Shakespeare’s to produce a lively and rather wacky show that is great entertainment from the word go — enhanced enormously by superb music from musical director Joey Hickman, who also throws in playing Demetrius and Flute for good measure.

In developing the show the actors are all allowed to make their own contributions, and with Deaf Awareness Week having recently been celebrated at the venue one wonders if it was Hart or Sophie Stone, who plays Hermia, who had the brilliant idea of Hermia and Lysander signing their conversations — which gave their relationship an intimacy and secrecy that was perfect for the plot.

And what a wonderful singing voice Lysander (Tyrone Huntley) had. We wished we could hear more, surely confirming the truth of that old theatrical saying “leave them wanting”.

Victoria Blunt gave a stellar performance as Bottom, taking the audience along with her every energetic step of the way.

The fun was wonderful at the beginning, but somehow seemed to go on just a little bit too long which marred the magic a bit. Could Hart and company possibly be too young to have heard that you should “leave them wanting”?

Nonetheless, it’s an absolutely superb production, which runs at the Watermill until Saturday, June 16.