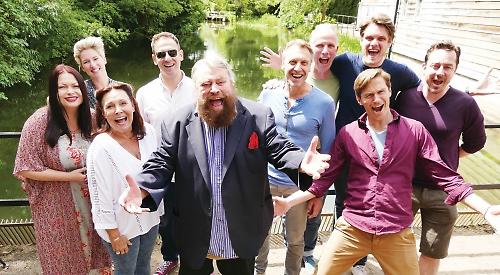 HE worked with Agatha Christie as a young actor — and even spent a fortnight in her company. Now Brian Blessed is back at the Mill at Sonning directing another of the legendary Queen of Crime’s plays.

The Unexpected Guest was first performed in 1958 — the same year that Blessed met the author while performing in a production of Spider’s Web at the Nottingham Playhouse.

The Flash Gordon actor directed that play at the Mill last summer, having made his professional debut as a director with 2016’s production of The Hollow.

A spokesman for the Mill at Sonning said: “Having known and worked with Agatha Christie, who better to direct her plays than the remarkable Brian Blessed? After his tremendous success directing Spider’s Web and The Hollow, we are thrilled to welcome back Brian once again.

“When a stranger runs his car into a ditch on a dark and foggy evening, he makes his way to an isolated house where he discovers a woman standing over the dead body of her wheelchair-bound husband, a smoking gun in her hand. What’s more, she admits to murder. Then, surprisingly, the unexpected guest offers to help her concoct an alibi. But is it possible that Laura Warwick did not commit the murder after all? If so, who is she shielding? The house seems full of possible suspects...”