Angels lose haloes down the hatch 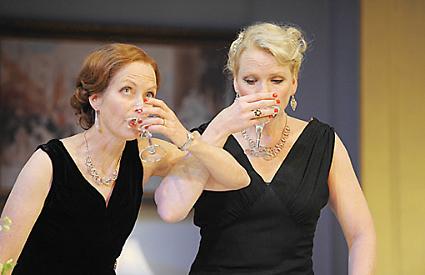 THERE’S nothing quite like girls behaving badly — particularly posh middle-aged girls — to raise a laugh or two, writes Lesley Potter.

Later this month two particularly posh girls bring their revival tour of a comedy classic, Noël Coward’s Fallen Angels, to the Theatre Royal in Windsor for a week-long run.

The story focuses on two best friends, Julia and Jane, whose passionless husbands are away playing golf. A mutual old flame announces his intention to drop in on them. All of a fluster, they decide there’s only one way to cope with this bombshell and that’s to hit the bottle — a champagne bottle, naturally.

As the corks fly and more bubbles are imbibed, tongues start to loosen, hidden jealousies surface and the claws come out. It’s not until the husbands turn up unexpectedly early that their evening hits a frenzied peak. The friends are played by Jenny Seagrove and Sara Crowe, both of whom have plenty of Coward credits.

* Fallen Angels is at the Theatre Royal Windsor from January 21 to 25. For tickets call 01753 863888 or visit www.theatreroyalwindsor.co.uk