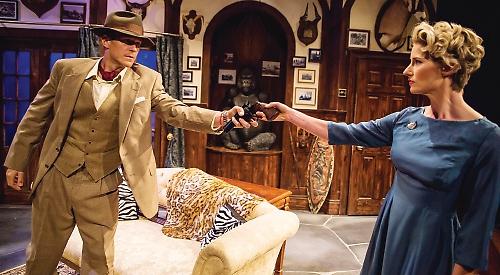 The Unexpected Guest, The Mill at Sonning | Thursday, June 8

YOU can’t help thinking that it’s Brian Blessed’s name more than anything that pulls in the sell-out crowds for his Agatha Christie shows at the Mill, but perhaps some credit should be given to the grand dame.

In this case, however, it will be Blessed and the cast who should take the credit because it is that combination which makes this otherwise story-by-numbers work.

And work they do from the very outset with some atmospheric presentation as Sean Browne as the eponymous unexpected guest and Kate Tydman as the apparently guilty murderer do an energetic verbal dance around each other.

We already have a body, so we don’t have to guess which of the unpleasant characters will get the bullet — all that remains is to find the killer. After that there’s a long parade of potential murderers and enough red herrings to revive the British fishing industry.

The man to sort this is Noel White playing the determined DI Thomas in his third outing as a policeman for Brian Blessed at the Mill.

All the usual Christie ingredients are in this story but she did not manage to bake it into a cake — that has to be done by the company and Noel White is a fine chef.

His range is excellent and beautifully controlled. It is he, together with great performances from the other two leads, Browne and Tydman, George Telfer as the scheming servant, Alexander Neal as a comic sergeant and especially Luke Barton as a manic brother to the victim, which lifts this tale.

It’s set in a dark and misty November in a country house with all the usual clashes of entitled rich with police authority.

It’s always fun to see the snooty having their noses rubbed in the dirt by a righteous inspector, and Blessed makes the most of this while still affording some sympathy to those who deserve it.

The atmosphere and tension are helped hugely by a top notch set from Dinah England.

Christie fans will love it. One thing, though — music features strongly in this show and not always for any evident reason. The performances are good enough not to need it as a crutch.