Curtain play doesn’t quite hang together 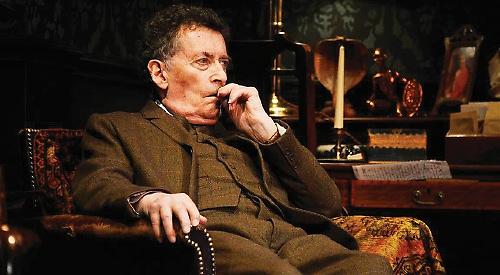 THERE’S a market in extending the Sherlock Holmes canon beyond Conan Doyle’s original stories, often to take the detective into his dotage.

Sometimes they work — and sometimes they don’t. Sherlock Holmes: The Final Curtain is in the latter category, although there’s certainly enough in it to entertain for an evening.

That is largely down to strong and reliable performances from the two leads — Robert Powell as Holmes and Liza Goddard as Watson’s wife, Mary.

These two old pros know how to wring meaning from a script, even if it isn’t there. But as a tantalising and self-contained piece of drama it doesn’t quite hang together.

It doesn’t know if it’s supposed to be funny, tragic, suspenseful or poignant, so winds up being none of them and the plot is shot through with holes and occasional cheap get-outs.

We open in 1922, more than 20 years after Holmes’s last case, but there are still those who would wreak their vengeance upon him and drag him from retirement back to 221B Baker Street.

A promising start sees a dead body on a Sussex beach and Holmes trying to tell the local inspector his job — only to be trumped by greater and more up to date knowledge.

If this theme had continued — the passage of time eclipsing greatness — then we might have had a masterpiece on our hands. But it doesn’t.

After this it becomes a strange investigation which would easily pass muster as a plot for Midsomer Murders and would serve that format well.

But we expect more from Holmes, especially after the genius interpretations from Benedict Cumberbatch and Martin Freeman — there’s no going back now and the playwright, Simon Reade obviously recognises that.

There’s a knowingness and irony in much of the dialogue which is enjoyable.

But in the end the story is convoluted without being engaging. And just when you think you’ve reached the end and everything has been sorted out we get a coda to suggest that it might not all be as it seems.

That’s fine if it’s already suggested in the script, but it’s not. A diverting evening, but not a great one.