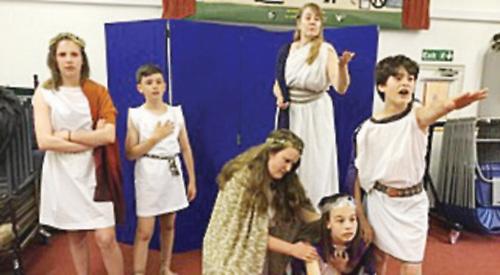 A GROUP of young actors are staging an adaptation of Homer’s The Odyssey at the Corn Exchange in Wallingford next week.

Odyssey by Ginny Avery runs from Thursday (June 28) to Saturday (June 30) at the Market Place venue.

Ten years at war in Troy and the Greek warrior king Odysseus wants to go home to his island, Ithaca, and his wife, Penelope.

But this was the time of the petulant gods of Mount Olympus and they’re not all on Odysseus’s side.

So they contrive to keep him at sea for another 10 years as he battles his way through monsters, sirens and other more pleasant distractions.

Odysseus’s adventures make for one of the greatest adventure stories ever told and Ginny Avery, the leader of the Encore Youth Group — the youth wing of the Sinodun Players — has taken the best of Homer’s epic poem and written it for a modern audience. She said: “Our 45-strong Encore cast has the opportunity to explore a whole variety of exciting and unique roles. Not just the sailors, but also the ship itself, a giant cannibal cyclops, the chorus, enticing sirens, drug toting lotus eaters and even a quaking mountain and a dangerous whirlpool!”

Members of Encore, who have also contributed to the play, will be acting alongside a group of adult Sinodun Players, who are playing the gods of Olympus.

“We have actively incorporated the numerous talents of the children to include specially written songs and music by Ollie Weikert, acrobatics, dancing and some very powerful dramatic acting,” added Ginny.