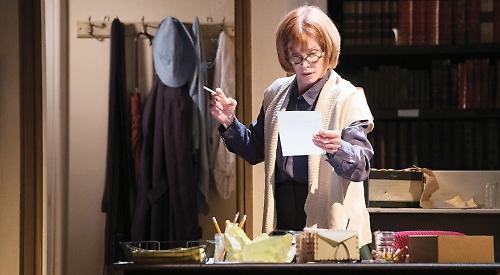 If Helene Hanff had ever put an ad in a lonely hearts column it would have gone something like that.

Hanff was an Anglophile with an unusual taste for difficult and long-dead English authors like John Donne. In 1949 she started ordering items from a Charing Cross Road bookshop.

Her easy style ran up against the formal manner of the shop’s chief buyer, Frank Doel, and it took several years before he could bring himself to sign off simply as ... Frank.

She turned her long, letters-only relationship into a much-loved bestseller which has been televised, filmed, and turned into a play.

Poignantly, Helene and Frank never met, although she did visit the bookshop in 1971, after it had closed and Frank had died.

Perhaps Helene was wary of actually seeing the England and the bookseller she revered — and ribbed. She kept finding excuses not to come over. As she says: ‘I’m not afraid of travelling, I am afraid of arriving.”

Frank grew to love Helene’s warmth and her breezy style, while the whole shop appreciated the food parcels she sent to a country still under rationing. The tinned ham was saved as a treat for the 1953 Coronation.

This engaging production, with Stefanie Powers as Helene and Clive Francis as Frank, is a revival of 84 Charing Cross Road.

A solid supporting cast provide musical interludes across an ingeniously split stage, half Helene’s brownstone flat and half the bookshop’s dusty interior. If you are looking for a gentle, wistful and entertaining evening then you are in luck.